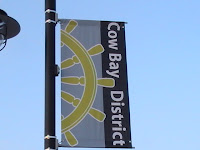 Some Cow Bay Business owners apparently aren’t thrilled with the plans of School District 52 to plant the city’s third high school in the middle of the Cow bay district.
Known as the Pacific Coast School, the 1st Avenue location which is part of the Sea Sport building was turned over to the School district in August.

Expressing their concerns over such things as parking, traffic and the suitability of an educational mix with the retail trade of Cow Bay, the local business association has brought their concerns to City council, offering up the first controversial debating point for the new council to work on.

It’s of interest to note that when North West Community College formulated its plans to create a new campus for the city, much of the debate involved ensuring that the college located in the downtown core, as it turned out almost one block away from the city’s retail core.

Now when the School District makes plans to do the same with its high school dedicated to providing a positive learning experience for those students that are seeking an alternative to the current system, the call is apparently not in our commercial district.

It will make for an interesting debate at council, which has long been dedicated to keeping the downtown areas of the city an active place, though the one point that the Cow bay group offers that makes some sense, is why the School District did not make use of one of the recently closed and vacant schools in the city.

We are sure that the real estate question and other conversation points will frame the debate in the short term, though one wonders how this all didn’t come up for discussion when the plans were being formulated and the Sea Sport building provided for the school months ago.
.
Pacific School Principal Steve Riley made a presentation to School District 52 in September on the progress of the project, which makes one wonder why, if they had concerns the Cow Bay Merchants didn't express them at that time.
.
Or why they didn't have similar concerns, when the Hecate Strait business Development folks set up shop earlier this year, with their educational venture in the old forestry building just down the road on 1st Avenue East.

With less than two months or so until the new school is supposed to open, it would seem doubtful that the School District will be forced to abandon their plans in these late stages while they are forced to look for a sublet.
The Daily News had details of the controversial land use issue as part of Monday’s paper.

Cow Bay Merchants are expected to voice their concerns about the school district's plans to open a new adult school during council's regular meeting on Monday.

Merchants have stated that they are very unhappy with plans to open the school on First Avenue East. In addition to their assertion that a school does not fit within the Cow Bay area, they say the school will also add to parking problems locally.

﻿Cow Bay Merchants Association president Glen Saunders said the issue was about the wisdom of putting a school in a light industrial and tourist zone in an available store space.

"(First Avenue East) is a busy road and I don't think it is appropriate to put a school in the middle of it," said Saunders.

A petition was circled around Cow Bay Friday asking merchants and light industrial shops alike to sign expressing their objections to the school.

Saunders wondered why the school couldn't be opened in one of the closed schools around the city, making better use of space that is already available for learning.

The city is currently undergoing a redesign of its Cow Bay zoning guidelines, which have not been updated since 1994. Part of looking into that redesign is including a larger area; comprising the First Avenue East strip running from the Hecate Strait building to the building that would house the new adult education school.

Current guidelines are not law though and are strictly for guidance and convenience use only. However, the guidelines do suggest that the area's character be maintained and there be an industrial character to street spaces.

Saunders said that including the school in the future of development in the area was not a good idea for a number of reasons.

Saunders questioned the wisdom of using a space that could house a revenue generating business such as a marine business or a tourism business for a school that is not open to the public and that does not generate significant revenue.

“That building was in the Cow Bay Zoning before and it was removed to house a computer store to go in years ago. The Cow Bay guidelines require that you need to be installing a retail service or a marine service or tourism related. All the property around that primarily is zoned Cow Bay development. To be sticking a school in the prime corner when it should be retail or tourism service, I just don’t think it’s appropriate,” said Saunders.

City council meets at 7 p. m. tonight.
.
Update: Well never we guess should one go out on a limb and try to guess what City Council may do. Despite our thoughts that with the school set to open in February the zoning would be approved, we find as the Northern View reports that City council voted against the zoning change leaving School District 52 in a bit of a bind and now on the hunt for a new location.
Posted by . at 12:24 am