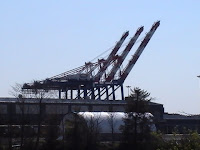 With news agencies as diverse as Bloomberg News to the Prince George Citizen picking up the theme of Thursday’s Globe and Mail article on the Port of Prince Rupert, the Port Authority was quick to offer up a contrarian outlook on the Globe and Mail’s findings.
As we outlined in an earlier post in the early hours of Friday morning on the Podunk blog, Friday's Globe outlined details from a confidential report that suggested that the start date for Phase Two of the Fairview Container Port will be delayed at least eighteen months, owing to the Port having hit the wall when it comes to borrowing money for the expansion project.

The financial prospects for the Port, combined with the current global economic troubles were just a few of the interesting points outlined in the Patrick Brethour article, the Globe reporter went on to suggest that Maher Terminals may be seeking other investment opportunities other than the Phase Two plans, while also raising the interesting possibility of Chinese interests constructing their own container port, to lure more of the Aisan lines to a port project separate to the Port of Prince Rupert’s Fairview Terminals.

The Port’s rebuttal to all of that came with a story posted to the Northern View website, in which Barry Bartlett, the Port’s communication director said that the Phase Two plans are still moving forward and that no construction was set to begin until 2010 at any rate, effectively dismissing the story as speculation on behalf of the Globe.
A similar review of the Globe story was provided for the Prince George Citizen, which had earlier published details of the Globe story, only to "unpublish them" later in the day on their website.

Not addressed in the articles however, were some of the questions that the Globe had explored in regards to Phase Two, the prospect of increased competition from southern ports anxious to hold onto their traffic as the scramble for shipping lines grows intense and a review of the PricewaterhouseCoopers summary which has apparently spurred on much of the speculation over the fate of the Phase Two project.

With a major Canadian newspaper gaining access to a confidential study before even the Port Authority in question has a chance to see it, doesn’t seem to broker much in the way of a reliable flow of information to the Port and the community it serves.

The Globe story raised more questions than were answered by the Port’s communication release; they’ll no doubt be questions that remain in the back of resident’s minds right through until the first shovel of dirt is taken up in 2010 if the schedule stays as it was proposed.

Prince Rupert port expansion not delayed, says spokesman
By Shaun Thomas
The Northern View
Published: December 19, 2008 2:00 PM
Updated: December 19, 2008 2:43 PM
Contrary to a story in The Globe and Mail on December 19, the Prince Rupert Port Authority (PRPA) says that there is no additional delay in Phase II of Fairview Terminal.
The article cites a “confidential study” that indicates the project has been delayed by 18 months to start in late 2010 due to financing difficulties. But PRPA spokesperson Barry Bartlett says that is simply not the case
“There has been no delay. We adjusted the time line a year ago to account for the longer environmental review process, so that hasn’t changed,” said Bartlett, noting that the Port Authority has yet to see the study referred to in the story.
“It has always been 2010, so this is really much ado about nothing...We have been telling everyone that we would look to start construction of phase two in 2010 with an anticipated completion date of 2014.”
In a statement prepared by the PRPA in response to the article, which Bartlett said was inaccurate, the Port Authority acknowledged that the ability of port authorities to borrow for financing major projects has been a challenge for some time.
“The restrictions and limitations on financing tools and borrowing capacity under the Canada Marine Act have been extensively highlighted as a key challenge for Canadian Port Authorities as a barrier to growth and expansion, and recently referenced in a report by the Senate Standing Committee on Transportation, which is public record.”
As for the future the PRPPA says it is looking bright despite a reduction in shipping to the west coast., but projections are being re-examined .
“As one would expect, the current economic crisis has led to a review of demand forecasts and business case as would be prudent in any development of this scope,” read the statement,
“Medium and long term outlook for transpacific trade and Prince Rupert’s opportunity to play a strong role in this arena remain strong.
Port expansion delay old news, spokesperson says
Written by Citizen Staff
Prince George Citizen
Friday, 19 December 2008
A Globe and Mail report that says the port of Prince Rupert is delaying the planned expansion of its container terminal by at least 18 months is old news, a port authority spokesperson said Friday.
The start date was moved back to late 2010 from the middle of 2009 about a year ago when it became apparent the environmental assessment would take long than first expected, Barry Bartlett said."
And it's been out there ever since," he said.
.
Citing a confidential study commissioned by the federal government, the newspaper said the delay is blamed on the global recession and the plan's own financing woes.
The study said the Prince Rupert Port Authority's limited cash flow and inability to borrow against its lands means it cannot afford to take on more debt.
The Prince Rupert Port Authority has not seen the report, Bartlett said. In a statement issued in response to the story, the PRPA said it and its partners remain committed to the expansion but added: "As one would expect, current economic crisis has led to a review of demand forecasts and business case as would be prudent in any development of this scope."
Currently estimated to cost $650 million, the second phase is designed to increase the container capacity at Prince Rupert to two million containers from 500,000 by 2015.
The Globe and Mail also said shipping volumes at the container port have fallen far short of initial expectations that capacity would be fully taken up this year and stood at only one-third as of the end of November with traffic dipping from the month before.
But Bartlett said volume has nearly tripled since the beginning of the year. According to PRPA figures, volume stood at 27,174 containers in November, down from 28,296 in October but well up from 9,397 in January.
Posted by . at 12:55 am