A full plate of events coming up at Chances in 2009 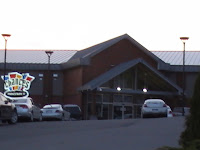 Prince Rupert's newest entertainment hot spot is ready to ring in 2009 in fine style and has many plans to keep those good times rolling along through the first part of the new year.
The New Years Eve edition of the Daily News featured a front page headline story on some of the changes on the way at the First Avenue dining, gambling and entertainment centre.
.
From movie nights to a string of special events timed to coincide with such events as the Super Bowl, Valentines Day and the All Native Basketball Tournament, Chances it would appear is going to continue to seek out new visitors, while holding their current clientele's favourites as well.
CHANCES BETTING ON NEW IDEAS AS IT RAISES PROFILE
Gaming centre plans to keep evolving and expanding its services in the coming year
By Kris Schumacher
The Daily News
Wednesday, December 31, 2008
Pages one and two

Since opening its doors to the Prince Rupert public just over a year ago, Chance Prince Rupert has added a number of new features to enhance the experience of patrons, including the recent addition of Food and Beverage Sales and Marketing Coordinator, Brett Kuntz.

﻿Having worked in the Kitchen with Chef Barry Willis since the gaming centre opened in October 2007, Kuntz was ideal for the new position as Chances continues to increase its profile in the community and Northwest region.

In his new role, Kuntz hopes to take the hospitality side of things to a new level for 2009 - and the events he has already helped coordinate have proven successful.

"I'm excited about what we're offering for our Black and Gold New Year's Eve Gala, both downstairs in the convention centre and upstairs in our dining room," said Kuntz.

"We've had a lot of great feedback with our Kobe Beef promotion, and I think people have come to expect a high level of dining quality from us.

"From day one, Chances Prince Rupert has striven to provide a world class dining experience in our state-of the-art facility, and the upcoming year will see us continue to heighten our guests' experience in our lounge and dining room."

Kuntz is also behind several new initiatives, including the VIP Rewards Program, thought which points are awarded to patrons for every dollar spent in the dining room and Lush Lounge.

The points can be converted into gift cards that are good throughout the facility, and VIP cardholders will receive a two-for-one appetizer coupon as well as a monthly newsletter with exclusive promotions and specials.

“Another thing we're hoping to do in the new year is use our 20-by-20 projector screen for movie nights, with cult movies on Thursdays and classic movies on Fridays," said Kuntz.

"We want to transition from dining to a cool place to hang out later each night, whether its an old black and white, a Bruce Lee flick or something like The Godfather."

﻿
"And as we role into February with the All Native Basketball Tournament and Valentine's Day, we're hoping to host a dinner and dance on that Saturday night," said Kuntz.

Next month, will also see the introduction of monthly menu specials, with January being "A Taste of Canada" and February including foods considered to be aphrodisiacs. Kuntz also revealed that finishing touches are being made on a meeting/ dining room that will accommodate up to 16 guests for a private dinner or lunch that will enhance patron experience after dinner or when a Vancouver Canucks game finishes or event such as Wii sports Night or Sex and Music Trivia.

"We will also be introducing a new customer satisfaction survey and service standards that will give us the tools to enhance our customers overall experience," said Kuntz. "Special Days will also become yearly events at Chances Prince Rupert. In the works for January and February are events for Burns Night, Super Bowl, Valentines Weekend and Mardi Gras, and we are looking to present a food, drink, and entertainment package for each of these days."
Posted by . at 6:46 pm