Baby waits for no traffic tickets… 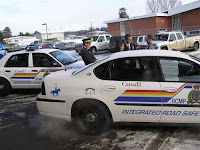 An apparently over zealous Prince Rupert traffic enforcement officer is the highlight of Monday’s paper, as the Daily News recounts the tribulations of would be parent hood for a local Prince Rupert resident.

As Monday’s paper outlines, local tattoo artist Patrick Tutin missed the birth of his child last week, after running afoul of one of the provincial traffic regulations, waiting outside the Prince Rupert hospital for a traffic ticket while the Missus, was inside adding to the population of Podunk.

Tutin it is reported had made a turn without using his signal lamp, which led to some dramatics on the way to the hospital and eventually a missed debut for a baby girl.

While it appears that the RCMP have decided to cancel the ticket, Mr. Tutin is still upset after having missed the arrival of his child and is seeking a full apology from the RCMP for their traffic officers vigilance in maintaining the law, without giving thought for a break for extenuating circumstances.

The Daily News provides the background of the Tutin’s side of the story, as well with the RCMP interpretation of the night’s events.

﻿Police officer refused to bend rules as man rushed to the hospital
BY GEORGE T. BAKER
The Daily News
Monday, December 22, 2008
Pages one and three

As tattoo artist Patrick Tutin franticly drove his wife Jennifer to the Prince Rupert Regional Hospital last week, likely the last thing on his mind was the trouble he was about to get into with an RCMP officer intent on writing him out a ticket.

With his pregnant wife on the verge of giving birth, Tutin made his way to the hospital along East 11th and McBride, hoping that he would get to hospital in time. Never did he imagine ﻿that an RCMP traffic officer would stand in his way.

"I was driving to the hospital and (the officer) said 1 didn't signal and, he wanted to pull me over," Tutin recounted for the Daily News.

Tutin said he was not speeding and decided he would continue his journey to the hospital because getting his wife and soon-to-be-newbom to the waiting professionals was more important than explaining himself to the traffic officer.

﻿According to Tutin, the officer eventually pulled in front of him just before Roosevelt Elementary School and slammed on his brakes bring both to a hard stop.

"He got out and started freaking out at me. I was trying to explain to him that the baby was coming but he sat there and argued with me for three or four minutes," said Tutin, whose wife Jennifer then began screaming that time was of the essence and that they could not go over proper driving conduct when there was a more pressing need.

The officer eventually backed off a little and escorted the Tutin’s to the hospital, where Patrick ran his wife to the nurses and then returned to deal with the police officer. ﻿

Unfortunately for Tutin, by the time he had finished with the by-the-book officer, his new daughter Abby-Lynn was already born. It only took eight minutes but according to Tutin he has been robbed of a memory of a lifetime.

“I was blown away, I walked into the room and staff said ‘It’s a girl’, I was like what?

Even though the officer paid a visit to Patrick at his tattoo shop to tell him to forget about the ticket, Patrick said it does not go nearly far enough to square up for what he has lost.

“This is the birth of my daughter. He didn’t say sorry he just told me not to worry about the ticket.”

Tutin now wants an official apology from the RCMP for the way he and his wife were treated during the ordeal.

Community Policing Officer Krista Vrolyk said that the RCMP is aware of the incident.

“I think it is really important that everyone knows that the police officer involved is a father himself. He had no intention of the events going the way they did. No one could have anticipated the events going that quickly including the father,” said Vrolyk.

“The police officer’s priority was to get them to the hospital so that they would receive medical attention and deliver the baby at the hospital,”

Vrolyk confirmed that the violation ticket would not be proceeded with and that Prince Rupert was looking into what next step to take.

Whether it be an official form of an apology or not, she could not say at this time.
Posted by . at 8:06 pm