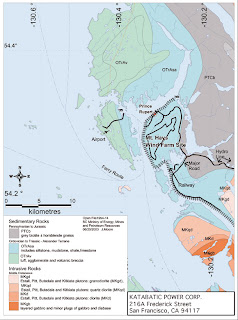 Considering the windy nature of the area over the last couple of days one would think that a wind farm is money in the bank for Katabatic Power. However, the gusty blows probably are more of a bonus than the required steady stream of wind to make the Mount Hays wind farm a successful operation.

And as they keep progressing forward on their plan to develop power from turbines on the south side of Mount Hays they have reached another important check mark on their to do list.

Katabatic Power recently signed an agreement with their supplier to provide 17 of the 1.5 megawatt wind turbines to be used in the energy project on Mount Hays. It’s expected that the delivery of the turbines will be made in the final quarter of 2007 and will help to get phase one of the project underway. If things go well, there’s a very good chance they will place a second order of 17 when they implement phase two of the plan to provide energy into the BC Hydro grid.

The project and its progress thus far were reviewed in the Daily News on Monday as well as a preview of what may come in the near future.

Katabatic Power has taken another major step toward building a wind farm on the far side of Mount Hays in Prince Rupert.

Last month, the privately-held developer of wind power, forged an agreement with Montreal-based AAER Inc. for the sale of 17 of its 1.5 megawatt wind turbines.

They are expecting delivery in the fourth quarter of 2007.

“We really like their technology,” said Jonathon Raymond, chief operating officer of Katabatic about AAER Inc. “It’s a machine that has been in operation in Europe for many years, it’s very efficient machine with a very good maintenance track record.”

Key to the deal is technology transferred from Germany’s Fuhrlander-Pfleiderer, a pioneer of the wind-generation industry in Europe.

AAER has the right to use the German company’s wind technology across North America.

The deal is worth between $35 million and $80 million, including future options and related maintenance contracts.

The range is wide because Katabatic may opt to purchase and additional 17 turbines from AAER to build a second phase of the project in 2008 at Mount Hays, on Kaien Island, south of Prince Rupert.

Raymond said the initial 17 turbines are expected to be delivered in September or October. Following that, the wind farm could be up and running in about eight weeks.

Once completed, the Mount Hays facility will generate enough electricity for approximately 12,000 homes. Last summer, B. C. Hydro entered into an electricity purchase agreement with Katabatic.

Raymond said the company has yet to determine whether it will expand initial plans for Mount Hays or if it will use its option in the contract with AAER to purchase wind turbines for operations elsewhere in B. C.

Katabatic, which has an office in San Francisco, also has plans for a much larger 3,000 megawatt facility on Banks Island, also near Prince Rupert.

That project is subject to being accepted by B. C. Hydro in its 2007 call for tenders.

“We are in the late stages of a financial transaction for a joint venture partnership with a large financial institution,” said Raymond. “We can’t talk about the details about that yet but we hope to make an announcement sometime in January.”

Although Katabatic’s project would be the first wind farm in B. C., two other companies are working to the same end and also have deals with B. C. Hydro. Dokie Wind Energy Inc. of Victoria plans a 180 megawatt project 40 kilometres west of Chetwynd to be operating in 2009.

As well, Dawson Creek residents formed Bear Mountain Wind and propose to build a 120 megawatt farm near the town.
Posted by . at 10:00 pm