BC Ferries explains the name game 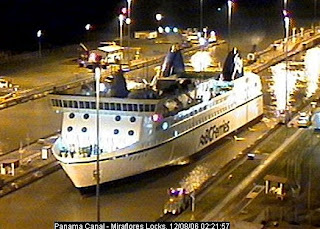 While many in the Northwest were hopeful that the new BC Ferry formerly known as the Sonia would carry the name of Hartley Bay, the Ferry Corporation instead chose to go with marketing over sentiment.

The Daily News relayed the thinking behind the naming of the vessel Northern Adventure in its Monday edition.

BC FERRIES SURPRISES SOME WITH NEW FERRY NAMES
By Leanne Ritchie
The Daily News
Monday December 18, 2006
Pages one and three

Despite many suggestions that the replacement vessel for the Queen of the North be named for rescue efforts of people of Hartley Bay. B. C. Ferries announced Friday the new vessel will be named the Northern Adventure.

The replacement for the Queen of Prince Rupert will be named the Northern Expedition.

According to the company, these names, “celebrate the beauty and wonder of exploring and traveling in Northern British Columbia,” and “capture the bold spirit of exploration and discovery that define the region.”

“As we begin an exciting new era of ferry travel to the North, we were looking for a family of names that captures the essence of the North Coast and reflects our optimism about the future growth of northern B. C.,” said David L. Hahn, President and CEO.

“Our northern routes are unique in that they provide passengers the opportunity to explore a vast area rich with natural beauty and cultural treasures from the deck of a ship, Northern Adventure and Northern Expedition capture that uniqueness and our commitment to showcase the tremendous opportunities for tourism and economic development that northern British Columbia has to offer.”

Beginning next spring, the Northern Adventure, formerly known as Sonia, will be sailing the Inside Passage route from Port Hardy to Prince Rupert.

The Sonia replaces the Queen of the North which sunk March 22.

At the time Capt. Edward Dahlgren, then superintendent of northern services for the company, suggested a fitting tribute to the efforts of Hartley Bay residents would be to christen the new ferry Spirit of Hartley Bay. Public response to radio talk shows and letters to the newspapers was positive.

Village residents helped ferry all 99 survivors to shore, and sheltered them after. Two passengers are missing and presumed drowned.

The Sonia (Northern Adventure) still has to undergo a $9 million upgrade at Victoria Shipyards before entering service in the spring.

The two-year old vessel has 74 cabins and carries up to 600 passengers and 101 vehicles.

Modifications to the Northern Adventure will include updating safety and security equipment; expanding, upgrading and reconfiguring the gift shop, galley, passenger food amenities and crew areas, modifying the stern ramp to be compatible with BC Ferries’ berths; and upgrading electrical, heating and lighting systems.

“The arrival of the Northern Adventure in Victoria… will bring us one step closer to restoring full service on our Northern routes,” said Hahn.

BC Ferries is currently negotiating with the provincial government on a replacement strategy for the Queen of Chilliwack, which services the mid coast. This process will take several months and when a new vessel is eventually put in service it will be called Northern Discovery.
Posted by . at 7:29 pm