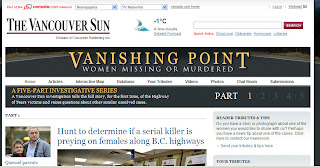 The Vancouver Sun has returned the many cases of the Highway of Tears to a very public profile, as they began on Saturday, a five part series on the missing and or murdered women of Highway 16 as well as examining other high profile cases of a similar nature in other parts of British Columbia and Alberta.

Titled Vanishing Point, Women Missing or Murdered, it provides a number of resource materials that will bring a new focus to the many, many files that have yet to find resolution.

With a number of past and current news articles, a data base, tribute pages, videos photos and a chat room for discussion, it offers a comprehensive archive of the past events and perhaps may trigger memories for some that could lead to a sense of peace for the families of those that have been murdered or gone missing.

Sun reporters Lori Culbert and Neal Hall combine their knowledge of the ongoing investigation and past events to take us back to the first reported case of 1969. From that first reported case they track the developments since then to the most recent case to take place on the outskirts of Prince George.

Part one which was posted to their website and published on Saturday offers a number of profiles for consideration, including the quest of Vicki Hill to find out what happened to her mother on March 26, 1978 when Mary Jane Hill died on the side of Highway 16.

Another section of the first segment is a review as to how the Highway of Tears investigation first began, which officially doesn't seem to have been a collective investigation until 1994 when three teenage girls were killed in the span of six months.

The Sun will also host a live chat session on Tuesday, December 15 at noon, where readers and viewers can ask questions and make contributions to the discussion and provide some feedback and focus to the five part series.

From the first recorded case of the Highway of Tears to the recent investigations on land just west of Prince George, there has seemingly been little to report from authorities so far. A frustrating state of affairs for the families and loved ones of the missing or deceased.

Many of these cases seem to have evolved into cold case files, while still under investigation there seems to be little new information or evidence to offer and at times we seem to go for months at a time without word on the progress or status of those investigations.

If the Sun's series jogs one memory, or provides a previously unknown bit of information for the police it will have provided a huge service to those families.