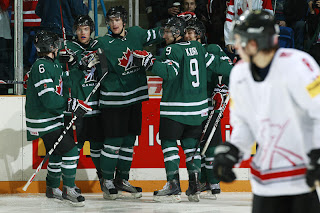 With three games under their belt, Canada's junior representatives at the IIHF World Junior championships are looking quite fine in their defense of their title.

So far, after 180 minutes of play the score is Canada 30 the other guys 2. A pretty impressive total at the tournament's start, helped out no doubt by the fortunate early draw that Canada has been provided with.

Latvia, which seems happy to be on the ice, but certainly isn't particularly competitive suffered the onslaught of Canada's offence first, providing little resistance to the 16-0 drubbing that was offered up in game one. Though it would seem that Canadians will be more familiar with their names now, TSN reports that the Canada Latvia game was the most watched game in World Juniors history. (Leaving us to wonder how long that record will stand with some high profile games still to come)

The Swiss held the goal count down, but couldn't tally any of their own, as Canada easily dismissed that challenge by a score of 6-0, much to the delight of the home town crowd, not so much we imagine to fans of the team with the white cross on the flag, who perhaps were looking for the Red Cross by games end.

As game three beckoned, many were suggesting that it would be a better test for the boys carrying the Maple Leaf on their chests, and while the play at times seemed fairly balanced, once the Canadians got moving (and annoyed by the first Slovakian goal which ruined their perfect run so far) it was game over. Canada put eight goals into their guests net before all was said and done, the Slovaks to their credit provided two answers to the otherwise impressive display of Canadian speed, skill and physical play.

The early results will no doubt give IIHF critics some ammunition in the suggestion that perhaps the tournament participants should be reduced by a few squads, leaving the hopeful contenders to seek out a different level of achievement, with maybe but one of the clearly outperformed squads allowed up to the top level per tournament year.

The rules being the rules, it seems that Canada, the US and perhaps the Russians and the Swedes have no choice but to fill the net, but it does appear unseemly at times to be beating up so heavily on those squads that seem to struggle at this level of competition.

Still, in tournament play, you play to win, so as uncomfortable as some Canadians may feel at the thumping's administered thus far, until further notice and a revisit to the tournament seeding we gather that is the way it's going to have to be.

For Canada, what now will be considered the true test comes up on New Years Eve, when Canada takes on the United States, a game which should be a dandy should it come anywhere close to last years epic battle in Ottawa.

The American's have done their fair amount of scoring as well so far (the poor Latvians apparently everyone's version of the shootout goalie cutout) and have shown the same physical kind of play that symbolizes North American hockey.

While there are no guarantees, New Year's Eve should provide for another memorable night of hockey like many other year enders of the past. One thing seems more than likely however, the nights of 16 goal games is probably over for both the Canadians and Americans.
.
Thursday night promises its share of scoring, but along with the offensive displays, we anticipate some hard hits, stellar defensive play and outstanding goal tending, a return to the kind of hockey that while reduces the chance of hearing train horns, or the waving of flags frequently, but one which will surely be the most entertaining hockey of the tournament thus far.
.
Item was first posted in the HockeyNation blog
Posted by . at 1:47 am