A change in hosts for a popular Podunkian internet forum 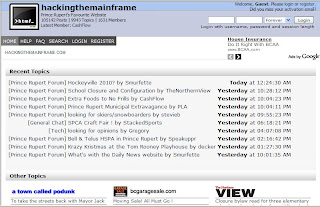 Will that be what may one day greet you when you log onto Prince Rupert’s popular chat portal hackingthemainframe.

In the ever changing world of Internet communication, Prince Rupert’s local conversation board has been transferred, though details remain undisclosed as to where the new home of the forum will be found.

A cryptic note (which we imagine is a tongue in cheek poke a local critics) was posted on the board suggesting the term kopeks in payment for the transfer. A quick search of the ever useful Google search engine finds that the kopek is a Russian form of currency, so we wonder if this means that Podunkian tidbits and conversation topics will now be in the domain of Mother Russia?

A notice advising the move of the forum was posted to the site over this past weekend, the former “owner” of the site, having grown weary of the frequent interaction off the boards, mainly in the form of letters and phone calls from local residents that found cause to complain about the Wild West nature of chat boards and the dedication of this particular board to the principle of free speech.

So, the move was made to migrate away from a CityWest server and onto the new host wherever it may be, leaving the nature of the talk on the board to remain local in scope and still providing a forum for local concerns. But with the move, effectively taking the complaint window as it is, for those that may not like the tone or timbre of the debate to somewhere across the Internet borders perhaps.

The promise of further details to come on the transfer was posted in a subsequent entry on the topic page. When those details are outlined and posted to the site, it will no doubt be an entry that will certainly be widely read by those that have come to find hackingthemainframe as an essential part of their daily routine.
.
Interestingly enough, the kopek was at one time apparently facing extinction, for many in the Northwest and beyond, the hope will no doubt be that the local chat board is not facing the same fate!
Posted by . at 1:35 am