Transportation Safety Board launches its own investigation into Northern Adventure sailing 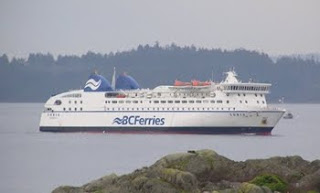 "The decision to launch an inquiry was made because the vessel got caught in bad weather, because there was damage, and because of the media coverage" -- Raymond Mathew, a senior marine investigator with the Canadian Transportation Safety Board, outlining the reasons behind their decision to hold an investigation into the Northern Adventure sailing of last weekend.

While BC Ferries conducts its own internal review of the events of last Sunday night/Monday morning, the Transportation Safety Board will begin its own investigation into the aborted sailing after encountering near hurricane winds in Hecate Strait. (see Podunk November 23)

The Transportation Safety Board intends to interview the captain of the Northern Adventure on that fateful evening, their hope by way of the interview is to learn if the proper protocols were in place during the course of the sailing.

At the main thrust of the investigation it seems will be the weather forecast for that night and its call for winds of 40 to 60 knots and seas of at least five metres, BC Ferries protocol calls for a delay or cancellation of a sailing when the forecasted seas are to be 3.6 metres or more.

As was reviewed on CFTK News earlier this week the sailing was a rather worrisome event for the passengers aboard the vessel, concerned about the judgment call on that evening.


Other passenger concerns from the trip revolve around a lack of communication between Ferry staff and the passengers and the Ferry Service and its passengers/customers, an issue that BC Ferries spokesperson Deborah Marshall commented on.
.
According to Marshall there was communication during the course of the incident, though she did add that there could be lessons to be learned from the events of the night, all part of the Ferry Corporations investigation.
.
Now, with the announcement of the Transportation Board's plans, there will two reports to read over about the events of November 22 and 23.
.
CTV News-- Two investigations launched into wild B.C. ferry ride
Opinion 250-- Northern Adventure Rough Sailing Under Scrutiny
Posted by . at 1:49 am