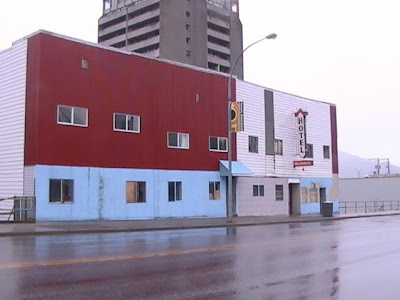 Officially, only five people are reported to have been affected by the hire in the downtown residences known as the Inlander, however that's a figure that few actually believe, as it's been said that there were probably more than those five "official" residents taking shelter in that particular building in the downtown core.
Regardless of the actual number though, the fact is, that after Wednesday afternoons fire, all , official or not, will be looking for new accommodations for the foreseeable future.
The blaze which broke out in the lower reaches behind the sprawling structure resulted in much in the way of smoke and water damage to the building, sending the residents to the streets and now seeking a new home.
Most will be relocated to the Raffles, some apparently reluctantly, as the various social agencies find them shelter and provisions after the controversial downtown hotel suffered what is described as badly damaged.
The Daily News provided some background on the fire and the uncertain aftermath for the residents as their front page headline story on Thursday, the Northern View provided an update as well posted to their website.
FLAMES DRIVE OUT RESIDENTS AS INLANDER IS HIT BY FIRE
﻿Low-rent building is badly damaged but all residents understood to have made it out
BY GEORGE T. BAKER
The Daily News
Thursday, February 5, 2009
Pages one and two
At about 2:30 p.m. yesterday, the lower east unit of the Inlander was engulfed in a two-alarm blaze.
Fire fighters were on scene immediately and responded quickly to put the fire out with many Rupertites looking on at the Second Avenue building.
According to an Inlander resident ﻿named Donald - who requested his last name be withheld - the fire began on a couch and spread quickly over to cabinets and the hallway.
"The fire alarm was going off and I checked upstairs and then downstairs at the very bottom basement level and looked down the hallway and the furniture was on fire and the dresser was on fire," said Donald.
He then yelled, "there is a fire!" and according to him the fire department was then notified right away.
While he did not know what started it, he said that the fire spread quickly.
Donald, who has lived on the third floor of the building since 2000, said ﻿that the smoke from the fire billowing out of the bottom two windows were noticed by residents of the building right away.
According to Mayor Jack Mussallem, the building is only coded to allow up to five people inside at any time.
The Inlander is the combination of two old hotels, with only one half allowed for residential living and the other half empty.
Mussallem said those living there have had an option to depart but were unwilling to do so.
"Those living there have been told they can move to Raffles but they have said they preferred to stay (at the ﻿Inlander) because it was a more central location," said Mussallem.
Some observers said there may be more than five people inside at any given time.
Former city street outreach worker Myles Moreau said he estimated that there used to be 100 people staying inside on any given night and, while he has heard there are fewer now, he said he would expcct that there are more than five pcoplc sleeping there.
Moreau has been inside the building oftcn, working with some of the residents. ﻿Moreau said that he was unimpressed with the building's structure.
"I used go in there quite a bit in fact," said Moreau.
﻿According to him, one of his client's rooms had a big container at her door full of bleach so that people could clean their rigs and there were holes ﻿punched above her ceiling.
"I had to go in there and do an interview once and it was pretty gross."
When asked if he felt the Inlander ﻿was a safe place to live, Donald said:
"No, I don't think so. It is sort-of all wood inside and it could have been a lot worse today."
Firefighters respond to Inlander blaze
By Shaun Thomas
The Northern View
Published: February 04, 2009 4:00 PM
Updated: February 05, 2009 11:15 AM
.
Some 16 members of the Prince Rupert Fire Department responded to a fire at the Inlander Hotel at 2:40 p.m. on February 4, where they discovered smoke billowing from the building and a fire blazing on the bottom floor at the rear of the building.
The firefighters evacuated all occupants from the building and began to battle the blaze. The flames were quickly extinguished and, while the fire was contained to the bottom floor of the building, heavy smoke damage was found throughout the building. There is, however, no estimate of damage at this time. The flames were quickly extinguished and, while the fire was contained to the bottom floor of the building, heavy smoke damage was found throughout the building. There is, however, no estimate of damage at this time.
Fortunately there were no injuries reported as everyone made it safely from the building. An emergency reception area was set up by Prince Rupert Emergency Social Services and six evacuees were provided with alternate shelter.
As well as the emergency personnel, including the RCMP and the B.C. Ambulance Service, employees of B.C. Hydro and Pacific Northern Gas attended the scene to ensure the utilities were shut off to avoid any further damage.
Posted by . at 10:29 am