Accolades for ANBT as it celebrates the 50th anniversary 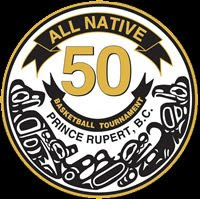 This Fiftieth Anniversary of the All Native Basketball Tournament was to be honoured this week by Basketball BC, as the governing body for Basketball in the province acknowledges the hard work that goes into the tournament year in and year out.
Each year Basketball BC takes time out at the end of February or beginning of March to salute the grassroots of the game with the Special Merit Award for 2008. The normal time frame for its awarding however was moved up this year, in order to celebrate with the ANBT and the many fans that have travelled to Prince Rupert to take in the tournament.
The Daily News featured detaiuls of the recognition as their front page headline story in Thursday's paper.
BASKETBALL WORLD TAKING NOTICE OF THE ALL-NATIVE
Tournament is to receive high honour from Basketball BC for its contribution
By George T. Baker
The Daily News
Thursday, February 12, 2009
Pages one and
The All-Native Basketball Tournament will receive a huge honour from Basketball BC this week.
Basketball BC will present the tournament with its Special Merit Award for 2009.
The award recognizes organizations and people who have made significant contributions to the sport of Basketball in B.C.
"The Prince Rupert All-Native Basketball Tournament organizers have done wonderful for job for years and this was a way for us to recognize the entire group," said Basketball BC President John Buis.
Right now, the date of the presentation is unknown but Buis said it could be as early as tonight during one of the games.
The tournament received special consideration this year from Basketball BC, not only because the tournament is in its 50th year.
"Normally, we award the trophy at the end of February or the beginning of March and then usually it's announced in April but we held a special meeting and brought this to the Basketball BC board's attention," said Buis.
The board agreed to have the award handed out early so that the presentation could take part during the tournament.
On top of the accolade, a member of the organizing team is to be invited to the awards function that takes place every April.
"Sometimes we have good ideas and sometimes it takes a little longer," joked Buis.
Buis expects to arrive tomorrow and will be joined by Basketball BC board member Richard Hunt.
This will be Buis' third time attending the tournament, the second as president of the provincial basketball governing body.
He said the tournament is indeed gaining more and more attention around the basketball-playing community around the province.
"Particularly, with the advent of the Internet, that's attracting lots of people and lots of interest because it is difficult to get to Prince Rupert at times and people want to follow it," said Buis.
He added that having organized the Lower Mainland's provincial High School boys tournament every year has given him a huge appreciation of the kind of logistical nightmare that big tournaments can be.
"I know what Clarence (Martin) and his group are going through to put that event on in Prince Rupert," said Buis.
Posted by . at 11:21 pm