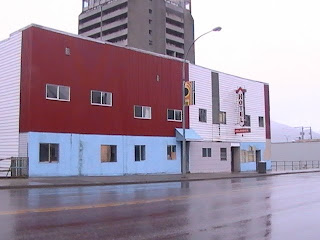 It's claim to fame is that of one of Prince Rupert's better known buildings, frequently the topic of conversation and on Wednesday afternoon it provided for a bit of drama in the downtown area, as the Inlander Hotel was the scene of a basement fire.
.
The afternoon fire sent smoke wafting through the downtown core and became the staging point for all of Prince Rupert's fire fighting apparatus, called to the scene of perhaps every fire fighter in towns worst case scenario.
Prince Rupert RCMP had Seventh street blocked to traffic and travel lanes reduced on Second Avenue West as they tackled the call, running hoses from second avenue down behind the Inlander.
It appears that no one was injured in the afternoon fire, but the few remaining residents of the complex will be forced to find new accommodations in the short term and perhaps longer, depending on the damage that the fire provided for in the labyrinth like complex.
The building has been more or less the last refuge for a few of those on limited incomes in the city, it's been a frequently controversial location over the years, the focus of many a city council debate, based mainly on its appearance and community concerns about the structures physical integrity.
The Northern View had a short piece on the fire posted on their website Wednesday afternoon with a few pictures while the topic of the fire became one of the more popular of topics on the local message board hackingthemainframe.
Posted by . at 11:01 pm