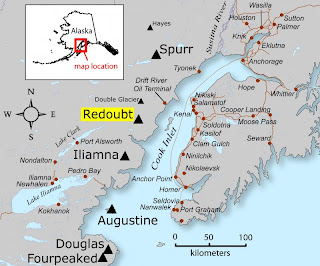 They're keeping an eye on the Redoubt volcano, which overlooks Alaska's Cook Inlet and is within the range of Anchorage, the state's largest city and major air hub. The volcano which last erupted back in 1989, has been rumbling for a number of days now, with a slight wift of steam starting to appear from the volcano.

The Redoubt Volcano Observatory had it's web server crash last week when word first came out of a potential eruption on the horizon, since that initial burst of interest, the server has become more stable and so far is able to provide updates and video cam photos of the mountain that everyone waits for an answer from.
Anchorage residents have been provided with a list of items to take care of should an eruption take place, including restricting their driving, stocking up on food and water and such.
The city is familiar with having to shovel snow through the winter, but should Redoubt blow they'll be swapping snow shovels for ash brooms in pretty quick order.
The Redoubt website provides a number of resources for the locals and those from afar who wish to learn more about the volcano and what to do should it erupt.
Anchorage Daily News-- Tremors, earthquakes shake Redoubt
Anchorage Daily News-- Oil terminal sits in harm's way
LA Times-- Mount Redoubt volcano, like a ticking bomb, keeps Alaskans on high alert
MSNBC-- Rumbling Alaska volcano sends Air Force planes to Wash
MSNBC-- Alaskans brace for Redoubt Volcano eruption
Fox News-- Alaskan Volcano Still Rumbling and Grumbling
Christian Science Monitor-- If Mt. Redoubt blows, Alaskans may get a light show
Scientific American-- Life on the Ring of Fire: Earthquake in Seattle, volcano set to blow in Alaska
Boston Herald-- Evidence of Alaska volcano eruption continues to mount