Why the weather office sometimes has a credibility problem. 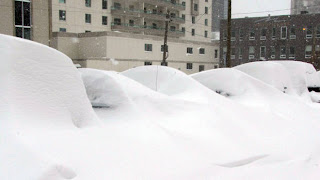 "When you forecast two to four centimetres and you end up with 25, there's something wrong going on," -- Environment Canada meteorologist Rene Heroux taking the rap for a bungled forecast for Montreal which saw the weather office off by about 1,000 percent in its snow fall prediction

The week of woe for the weather office got its start in London, Ontario over the weekend, and while they did call for a rather sizable amount of snow, pretty well no one anticipated the snowpocalypse that arrived on the streets of London on Sunday, Monday and Tuesday.

The southwestern city received some 148 cm of snow in less than 48 hours, a dump of winter wonderland that closed schools, took transit bus drivers off the roads and confirmed that the sometimes the mail just won't get through as Canada Post suspended delivery to London area homes for at least two days.

The total snow fall of the three days nearly equal to the amount of snow that London received last year between December and March.

So much snow has fallen in the community that a number of other Southern Ontario communities have sent snow removal equipment to London to try and keep the dig out on track.

The southern Ontario event apparently worked its way eastbound and regrouped over Montreal on Monday, much to the surprise of the forecasters who had suggested that Canada's second largest Metropolitan region would receive some 2 to 4 cm of snow, By Tuesday afternoon 25 cm had fallen and the storm was still raging even as the mea culpas were drifting out over the city.

By Tuesday, the weather office in Montreal was issuing a most unusual statement "Blame us. I mean, we're the ones who are issuing the forecast so obviously we are the ones who didn't see it coming."

No word if they've offered to come on over and help shovel out the driveways however.

The Environment Canada forecast for Prince Rupert For Thursday calls for showers, windy conditions and a High of 6, then again...
Posted by . at 10:42 pm