"Never has the World Cup been in Russia and eastern Europe, and the Middle East and Arabic world have been waiting for a long time, so I'm a happy president when we talk about the development of football," -- FIFA President Sepp Blatter, providing his talking points to a most remarkable pair of decisions  this week announcing World Cup host sites.

The world of football (the roundball variety) is still reeling from this weeks decision by the world game's governing body FIFA to award the 2018 and 2022 World Cups to Russia and Qatar respectively.

Decisions which left both the United Kingdom and the United States standing on the sidelines wondering what hit them and what's really going on. 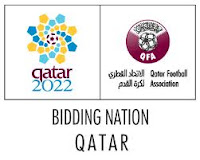 The surprise announcements seem to have gone against the conventional wisdom that England for sure and possibly the United States to a lesser degree were the front runners. Providing for the leading bids in the always controversial selection derby that takes place every time FIFA awards their celebration that brings the world best Football (soccer) nations together every four years.

The British in particular are in almost a state of shock, particularly after the vote count showed they had but one other vote besides their own, a collapse of support that has left them rather sour on the always controversial machinations of the FIFA bidding process.
.
.

.
.
No shortage of conspiracy theories are being bounced around the pitch and boardrooms these days, most of which subscribe to the oft held belief that FIFA, is shall we say, not the most honest of organizations to grace the sporting world.

The loss of the Word Cup bid, puts the fate of England to ever play host again in most of our lifetimes in some serious doubt, with the FIFA rotation of sites not destined to return their way in the foreseeable future.

In the minds of most, this was to be their time and now that it's not, these bad feelings will no doubt linger for years to come. It all makes for a bitter pill to swallow for the land that claims the title of being the Mother nation to the game.

As if to reinforce that point, Roger Burden the acting chairman of England's Football Association and the current liaison from the FA, says he will resign his position, outlining that he no longer trusts his compatriots in the international governing body.

The reaction was much the same in the United States, their governing body had pretty well promised FIFA an attendance bonanza as well as a corporate love fest that would have provided for much of the schmoozing that FIFA execs seem to thrive on.

Yet when the votes came out, Qatar the middle eastern nation that probably isn't much larger than Rhode Island won the day.

That surprise victory again has provided for no shortage of commentary about the process of the FIFA bids and whether providing your best package of options for the princes of football can stand on just the merits of what may be best for the sport.

Already the questions are being asked if FIFA really knows of what it has done, World Cup matches in 2022 will be played in temperatures estimated to be peaking well past 100 degrees Farenheit, so unless they plan on playing at midnight, heat exhaustion and other perils are thought to be a major problem, beyond the logistics of such a huge event taking place in such a small nation.

For their part the American's are bemoaning a lost opportunity for FIFA to continue to help grow the game in North America, the lost bid they suggest could do more damage to the MSL's quest for more relevance in the American sport cycle, leaving a bitter taste in their mouths over the perceived mixed messages that FIFA sends to many of the world's football associations.

Frequently referred to as the Beautiful Game around the world, it's  a slogan that in the minds of English and American officials at least, and perhaps a few others around the world, probably won't extend to those that control the strings and pull the levers at the FIFA offices.

The controversial stylings of FIFA have long been under the microscope of the world's press, volumes of material have been written over the years over the many head shaking decisions that they issue and the questionable alliances that build up when these bidding wars take place.

Two of the most notable of tomes on the topic come from Declan Hill and Andrew Jennings, who have both outlined criminality and corruption when it comes to the world of football and the machinations of FIFA's members.

With this latest decision from FIFA, and judging by the vitriolic articles coming from the British press in particular this week, it would seem that a whole new collection of works awaits room on the bookshelves beside the works of Mr. Hill and Mr. Jennings.