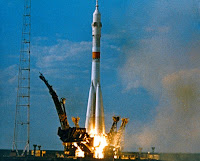 A Vancouver based astrophysicist wants to see Canada become the launching pad for future scientific discovery and his choice for a home port for the adventure would be Prince Rupert.

Redouane Al Fakir who is the head of the Muhammad Institute for Space Science, an organization dedicated to putting the Islamic world into the forefront of space exploration would like to see coastal British Columbia become the launching point for the adventure.

He has short listed two locations for his would be launching pad, Tofino and Prince Rupert, based mainly on our secluded but accessible by road locations, an ideal combination it would seem for a space exploration departure gate.

His plan is called Space Launch Canada and he has been making the rounds to try and sell his vision for the future, introducing the idea of British Columbia's place in that future at a public forum last month.

His venture is being organized under the umbrella of his non profit institute which is located at the University of British Columbia.

He estimates that it would cost 100 million dollar to build any such facility and get it operational, so far he's secured 250,000 dollars towards the goal mainly from overseas sources.

He has been approaching middle eastern countries such as Qatar and the United Arab Emirates to see if they are inclined to add to the pot, he would also like to see such Islamic countries as Malaysia and Indonesia join in on the project.

So far there has been little comment on his plans from any Canadian officials including Canada's Space Agency, which one might imagine would want to know about any such kind of development in the works.

His ambitious blue print for construction and deployment would see rockets blasting off of our coast in 2015.

The CBC offers up the full review of his idea with this item posted to their website.
Posted by . at 7:06 am