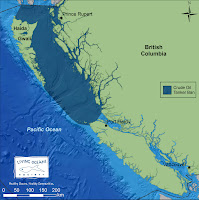 Councillor Joy Thorkelson, who is also the UFAWU representative for Northern British Columbia has taken pen to paper and composed a defence of the plans to make permanent a moratorium on tanker traffic on the north coast.

The councillor's thoughts appear in The Province today, a guest column that outlines the opposition of those in the commercial fishery, as well as those communities along the coast and on the inland waters that depend on that fishery for their livelihoods and economic base.

She outlines how the current standards in place for the fishery have rendered economic hardship for those communities, though it still provides a major segment of jobs for those that live on the north coast and Haida Gwaii.

It's those jobs that she suggests would be at further risk if the oil tankers are allowed to come into coastal waters to port at either Prince Rupert or Kitimat, her fears being that inevitably the increase in traffic will result in an oil spill that will result in all of our natural resource wealth of the fishery to vanish.

Her guest column to the Province outlines how the introduction of oil supertankers to the North Pacific will put at threat a way of life that has played an important role in the development of communities and First Nations throughout the region.

It's to that theme that she outlines her call for an oil tanker ban for the North coast, you can review her entire column from the paper today, click here to go over her notes.
Posted by . at 9:11 am