Is Rupert out of the Canpotex sweepstakes? 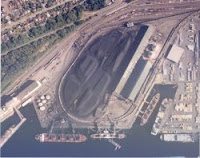 "It allows us to run more reliably, [with] better service and more volume," -- North Vancouver's Neptune Terminals President, Jim Belsheim explaining how a 37.5 million dollar upgrade project at the Canpotex Potash terminal will benefit both the company and it's customers...

If it is indeed a choice between Vancouver and Prince Rupert for Canpotex's investment dollars, then this article from the Vancouver Sun may for some, portend a not so good omen for development of potash terminal at Ridley Island.

Neptune Terminals, the North Vancouver terminal of which Canpotex is a major shareholder is about to receive 37.5 million dollars for an expansion project which will upgrade the material handling and conveyor systems that transports the potash from trains and moves it first into storage and then onto ships.

When completed, the terminal will be able to move twice as much potash per hour and provide up to thirty more jobs for the North Vancouver terminal.
The Canpotex website outlines the background on its fifty percent ownership of the North shore operation and describes Neptune Terminals as the location where it ships the majority of its product through.
Part of the incentive for the North Vancouver upgrade could have been the injection of some 137 million dollars from federal and provincial coffers to upgrade road and rail connections to the North shore of Greater Vancouver and to the terminal.
In September, Canpotex hosted an open house in Prince Rupert, a well received discussion session which saw many local residents appear and offer their support to the prospect of a new terminal at Ridley Island.

What remains to be seen is if this lower cost "upgrade" in North Vancouver, means that the more expensive and extensive Rupert option may still be on the burner, or if in these financially insecure times, Canpotex has decided that a smaller scale upgrade is all that they require.
For Rupertites, especially those that invested their time and emotions into the public session, it will very much be a glass half full or half empty discussion over the next few days.
.
We will all be looking forward to further communication from Canpotex in the days to come, reassurance that our hopes are still alive, or confirmation that yet another major project has somehow slipped through our fingers.
Posted by . at 10:52 pm