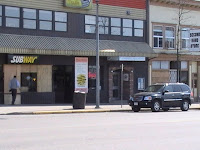 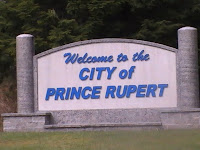 The mean streets of Prince Rupert continue to lead the pace of the Northwest, as the latest statistics released from the Government of British Columbia's Police Services Policing Jurisdiction trends report reveals that Criminal code violations continue to be on the high side in the city's jurisdiction.
Despite a declining population over the last ten years, the numbers remain high as Prince Rupert's Crime rate stats continue to hover near the top when taken by ratio to population.
In 2008 there were 3,132 Criminal Code Offences listed for Prince Rupert, placing the city in third place overall, behind only Quesnel and Williams Lake.
Prince Rupert's high level of criminal code offences translates into a crime rate of 244 with a population listed at 12,860.
The Quesnel numbers crunched to 290, for a population of 9,567, good for second place of the listing of the provinces infamous communities.
While Williams Lake claimed the crime stat title with a crime rate of 336 for a population of 11,133.
By comparison Vancouver's rate was 90, Surrey was 105 and Saanich on Vancouver Island was 52. A larger population spread to distill the numbers and more police resources perhaps responsible for the more sedate criminal activity numbers.
There is good news in the stats for Rupert however; Prince Rupert's Crime rate is down from 2007 when it peaked at 267, a year when 3,450 Criminal code offences were recorded.
The crime rate is defined as the number of Criminal code offences per 1,000 population (traffic offences are not included in the crime rate determination)
As for the Northwest, our neighbours rates are on the rise, Terrace's Crime rate was listed at 234 up from 227 in 2007. Their Criminal Code offences in 2008 totalled 2,536 up from 2,462 in 2007.
Criminal Code offences in Kitimat were up as well with 1,020 listed in 2008 an increase from 2007's number of 958. Making for a crime rate of 111 in the Aluminum city.
Smither's Crime rate was 224 a decline from 2007 when they were listed at 251. In 2008 there were 1179 Criminal Code offences recorded in that city, down from the 1,320 listed in 2007.
When you break down the crimes by category, there is a glimmer of good news, with declines in many of the categories.
.
For Prince Rupert violent crime was down, with 498 incidents recorded in 2008, down from the 660 that were listed for 2007.
Sexual offences were on the decline as well, the reported number of offences for 2008 was 31, down from the year before when 56 were recorded.
454 Non-sexual assaults were reported for 2008, a decline from the 596 of 2007.
Property crimes were down as well, in 2008 there were 648 reported, the 2007 number was 659, progress seems to have been made on that file as the decline the continuation of a pattern that started in 2005 when the property crime rate number was 901.
Break and Enters were also on the decline, 112 were reported for 2008, compared to the 134 of 2007 and the high water mark of 206 of 1999.
Residential Break and Enters however increased by one, with the 2008 number listed at 73, compared to 72 in 2007.
Motor Vehicle theft was down by one, in 2008 the recorded number of vehicle thefts was 20, compared to 21 in 2007.
Theft was up, the 2008 numbers for Rupert showing 466 incidents, compared to 459 in 2007. However theft from automobiles was down, the 2008 report showing 103 incidents compared to 123 in 2008.
The Other Crimes category was on the decline with the assorted crimes of that category totalling 1,986 for 2008, down from 2.131 in 2007.
The one statistic that will not come as a surprise will be the Vandalism numbers which show a spike in incidents in 2008 at 579, up from 2007 when the number was recorded at 564.
You can view the entire report from the BC Government web site, it outlines the Crime trends over the last ten years...
While the city can find solace that the numbers are in decline in most categories, it still provides a stark portrait of a community and it's troubles. While clearly many of our crimes are not the thing of the high profile incidents of the bigger cities, there still should be some thought given as to the resources we need to provide for our own crime concerns.
.
Considering our numbers put us in the top three of crime ridden communities in the province, it may be time to assess what we need to do to get out of the top ten and seek out a more comfortable spot further down the list.
Posted by . at 8:23 pm