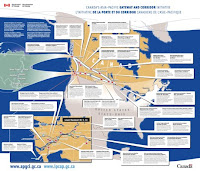 If a number of recommendations from a recently completed report into the Pacific Gateway are implemented as provided, there will be some major changes to the way we trade, work and develop our Pacific ports, many of which will be of particular interest in Prince Rupert.

From a change in the nature of port bureaucracy up and down the coast, to what will be a very controversial approach to the present labour arrangements, the report will prove to be vital reading for anyone with an interest in the future of the transportation gateways of the province.

It is a report that provided the Minister with over 30 different options for change in Canada’s gateways to the world and suggests that some major changes to the way we do business are required.

The panel consisting of Arthur Defehr, a furniture manufacturer from Winnipeg, Manitoba, T. Richard Turner, a chairman of the Insurance Corp. of B.C. and Prince Rupert Grain’s President, Jeff Burghardt, delivered a wide ranging report on many transportation issues, taking a comprehensive look at rail, air and marine transportation on the coast. Included in the report are what will no doubt be a few controversial recommendations that will surely be of interest to Prince Rupert residents.

High among the panel’s thoughts was the amalgamation of the Prince Rupert Port Authority with that of the newly merged Vancouver and Fraser Port Authorities.

"We recommend that a single port authority be created to include the existing major Vancouver ports plus Prince Rupert. This is the only way to assure complete collaboration of Canada's West Coast ports and allow them to compete effectively with other North American ports. This would also assist in maximizing the collective vision of the Pacific Gateway."

That would be a move that would be quick to stimulate the imaginations of the more conspiracy minded Rupertites. Many of whom view the Vancouver Ports with a healthy bit of suspicion. The amalgamation idea was first introduced a few years ago, and at the time was dismissed by many on the North coast, who feel that there is little chance that the larger Vancouver port structure would be inclined to actively help the rival Port of Prince Rupert develop.

Those are conspiracy thoughts that apparently are not shared by the panel, which in their report urged that the Rupert port expansion proceed immediately, in fact recommending that the timetable of expansion should move ahead of any plans of expansion in the lower mainland, owing to the large degree of resistance that those plans of expansion are receiving in the Vancouver area at the moment.
A more contentious issue would be their observations on the labour situation with Canada’s ports; the panel observed that in their opinion there needed to be a change in the way that human resources planning is being handled at Canada’s West Coast ports. From recommending that terminal operations be taken away from Port Authorities or government, and turned over to private sector operators (perhaps along the lines of the way that Maher Terminals operates in In Prince Rupert?), to giving consideration into making the majority of the labour activities on Canada's waterfronts an essential service.
Many of the points that they wished to stress in their report will be the kind of thing that gets posted in nion halls up and down the coast.

"There are prohibitive costs built into our West Coast labour structures. These include outdated practices such as the use of daily hiring halls, dispatch employment and over-manning. Addressing these issues will lead to an immediate increase in the true capacity of our port system."
As part of their research into labour issues in the world of marine shipping, the panel utilized studies of similar situations in Australia. Where revised labour initiatives have changed the past practices there, including the creation of a virtual 24/7 industry, that doesn't have large requirements for overtime payouts for labour.
From those observations the panel made a number of recommendations for the British Columbia marine industry including:
Eliminating the British Columbia Maritime Employers Association and with it the eliminating of dispatch hiring hall practices; reviewing and reducing the practices that cause severe over-manning for specific dock tasks including the practice of working four hours and getting paid for eight; and creating permanent employment levels at facilities in a direct employer-employee relationship.
Needless to say that most likely will get the attention of the International Longshore and Warehouse Union, which probably won’t be inclined to surrender their many years of negotiated labour agreements at the drop of a report on the Trade Ministers desk.
The report was accepted as a discussion paper of sorts, destined to be distributed to a number of industry "stakeholders", with no binding requirement on the Federal Government to accept any or all of the recommendations provided. One thing is certain, it’s a safe bet that many of these points will make for some vibrant and quite vocal discussion.
What remains to be seen is how many of the changes recommended come to pass, or if it joins the collections of past industrial studies, gathering dust on a shelf. The kind of documents that are left for research students in years to come to browse through and wonder if the report provided for a momentum for change or just the wishful thinking of a government mandated focus group.
There has been comprehensive coverage of the report over the last few days; here are some links to various news sources and their observations on the issue.
Globe and Mail--Open Pacific gateway wide, Emerson told
Globe and Mail--B.C. port study rocks the boat
CBC News--Big changes proposed for Pacific ports, railways, airports
And of course with the report having such an important impact on the future of the Port of Prince Rupert, it was featured as the front page story in Wednesday’s Daily News.

A new report co-authored by Prince Rupert's Jeff Burghardt calls for dramatic changes to every element of the transportation corridor if Canada is to develop a successful trade corridor to Asia.
This includes bumping up the Prince Rupert container expansion ahead of Vancouver and amalgamating the Prince Rupert Port Authority with the newly created Lower Mainland port authority.
The report to International Trade Minister David Emerson was put together by Burghardt, president of Prince Rupert Grain, as well as Arthur DeFehr, a furniture manufacturer out of Winnipeg and T. Richard Turner, chairman of the Insurance Corp. of B.C.
"The largest opportunity for economic activity and success for Canadians with the Pacific Gateway is through the development of a marine container business that has national reach," they said.
"But we learned very quickly and repeatedly that Canada is not a particularly important world player. What was made so clear to us, mostly in Asia, is that we have to find ways to be better than our competitors which are principally in the United States. Being less bad is the wrong strategy."
A spokesman for Emerson said Tuesday the report was being circulated among stakeholders for discussion. The minister would not comment on it and government was not bound by any of its recommendations, he said.
The 27-page report includes more than 30 recommendations covering marine ports, railways, airports and airline operations.
Among the suggestion for the northwest transportation corridor is the controversial suggestion - previously put forward by the B.C. Progress Board two years ago - that the Prince Rupert Port Authority be amalgamated with its Lower Mainland counterpart.
"This is the only way to assure complete collaboration of Canada's West Coast ports and allow them to compete effectively with other North American ports. This would also assist in maximizing the collective vision of the Pacific Gateway," they said.
In addition, they call for container terminal developments in Prince Rupert to be pushed ahead of those in the Lower Mainland, which face opposition from residents.
"We recommend that policy-makers develop container capacity in Prince Rupert before making investments in Vancouver, beyond what have been announced to date. We believe that capacity can be expanded in Prince Rupert relatively quickly and such a strategy will allow time for Vancouver to develop solutions to its congestion."
And they call for the provincial and federal government to speed up efforts to deal with First Nations and environmental permitting issues.
The report also recommends putting terminal operations in the hands of private operators but with competition among them, and speedier handling of containers, including inland terminals to clear bottlenecks.
A potentially controversial set of recommendations call for drastic reform to working regulations to make ports round-the-clock operations.
"The ability to change the labour environment on the Canadian docks is perhaps one of the best opportunities to differentiate ourselves from competing U.S. ports," says the report. "Failure to do so would be an impediment to a significantly enhanced Pacific Gateway."
Posted by . at 11:48 pm

Labels: Asia Pacific Gateway in the Northwes, major changes to the way the ports will run