Some parts of BC see tax cuts 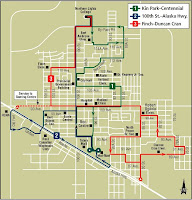 The Prince George website Opinion 250 has an interesting story about the planned reduction of proposed commercial taxes in Fort St. John, an issue which has long a major concern for the city's struggling commercial businesses.

With Grande Prairie just down the road from BC's Energy centre, many local business leaders have expressed growing exasperation at the frequent and hefty tax increases inflicted on one sector of the northeast city. A situation that they say poses a roadblock to commercial growth in Fort St. John and tends to drive business and customers to the shopping meccas of Northwestern Alberta

It would seem that the current council there has finally seen things their way, as there is now a proposal set to be put forward at that city's council to reduce the commercial tax rate from 42% to 20%. In order to make up some of the shortfall from those reductions, Fort St. John residents will see their property taxes increase from 13 per cent to 18 per cent and the city will go ahead with 1.8 million dollars in cost cutting from this years budget.

It will be a tax cut watched with interest from Prince Rupert's commercial base which has had their own issues with the rate of civic taxation over the years.

Opinion 250 features the full details on their website
Posted by . at 10:23 pm

Labels: Commercial taxes in Fort St. John cut in half