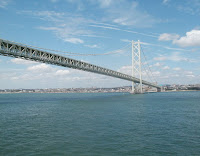 Normally it’s Mayor Herb Pond that is the one making political hay from the development of a bridge between Prince Rupert, the airport and then a road on to Metlakatla and Lax Kw’alaams (Port Simpson), but this week it’s the regions MLA who is asking the Liberal government about its dedication to the concept.

North Coast MLA, Gary Coons issued a press release last week asking some pointed questions about the status of the much discussed but slow to develop transportation conduit for the north coast. So far of the many suggestions on improving transportation between Prince Rupert and the First Nations villages only the Lax Kw'alaams ferry and the Tuck island road have been introduced to the north coast, the road considered a part of the overall plan for the fixed link project.

The bridge, the big money item has long been the staple of local and provincial election campaigns, at one point making progress to the sketch phase, which showcased a bridge that looked to rival Vancouver’s Lions Gate bridge in its scope though certainly not in its traffic load.

It was recently featured in an overview of potential "Gateway" projects for British Columbia, pegged at a cost of 72 million dollars ( in 2006 dollars) the synopsis of the project appeared on page 55 of the final report for the Situational Analysis of
Projected Asia-Pacific Gateway Investments

The prospect of a fixed link was first floated back when the city’s population was trending towards 20,000 residents, since that time the population has worked its way downwards with the decline of the local economy, making the prospect of the bridge a rather far away item on the wish list.

Yet hope springs eternal, and the prospect of the province linking in with federal monies to link Prince Rupert with Lax Kw’alaams, may yet provide cause to dust off the sketches and seek out a route for some black top.

While we are still a good six months away from the municipal election and a year away from the next provincial one, it would appear that the “link” is going to be one of the key planks for politicians everywhere on the North coast. It was popular last time and should make for a steady diet of what could soon be as soon as this November.

The Daily news featured the story as their front page item in Tuesday’s paper.

COONS AND POND EAGER TO SEE TSIMSHIAN ROAD DOESN’T STALL
Local politicians keep up pressure on ministers and premier over road
By Kris Schumacher
The Daily News
Tuesday, May 6, 2008
Pages one and three

A project that would connect Kaien Island to Digby Island the Tsimshian Peninsula has been in the works for several years now, but North Coast MLA Gary Coons says it is yet to get the attention it deserves.

The Tsimshian Peninsula Fixed Link Project was originally proposed as a project that would connect Prince Rupert to the Digby Island airport and on to the Villages of Metlakatla and Lax Kw’alaams by way of bridges.

Because the airport and First Nations communities are currently only accessible by water, Coons believes the project is vital to the economic development of the region while each of the communities works toward becoming increasingly viable and self-reliant.

Last week, Coons asked ministers tough questions about the status of the project, for which a memorandum of understanding covering the design process has already been completed by the provincial and federal governments, the City of Prince Rupert and the two bands.
“The Mayor of Prince Rupert, Herb Pond, has called the infrastructure investment “too practical to ignore,” and I think he is correct,” said Coons in a letter to Economic Development Minister Colin Hansen and Transportation Minister Kevin Falcon.

“The outlying villages in the Tsimshian Peninsula need a reliable transportation corridor if economic development is ever going to become a reality in this area.”

During his recent visit to Prince Rupert to announce more than $200,000 in funding for improvements to Mariner’s Park and for building relationships with Asian cities, B. C, Premier Gordon Campbell spoke about the status of the Tsimshian Peninsula project and whether the province had any plans to move it forward.

“We talked about it four or five years ago and it’s not a new project, but it’s a question of where we put the first dollars to maximize the benefits for the community and the overall corridor,” said Campbell.

“The Northern Transportation corridor is a critical component of our long term strategy, so we’ll do what we’ve done in the past with Prince Rupert.”

“We’ll listen to their ideas and we’ll try and provide assistance,’ said Campbell.

“We want to make sure Prince Rupert is known as a transportation hub, but I want to be fair to everyone so you can’t expect everything at once, but you can expect progress to be made. You’ll see that with the port, as we’re clearly going to be pushing hard for Phase Two. As we build Phase Two and build the capacity, I think there will be further investments that will take place.”

Coons is aware of the importance of building the Port of Prince Rupert and the provincial investments that will be necessary for expanding capacity, but believes that to reach the goal of expansion other infrastructure investments need to happen.

“Aside from promoting development in First Nations communities, this project would make out airport more viable, thus supporting the trade infrastructure brought in by our port,” said Coons.

“As I have repeatedly stated in the house and to various ministers, if we want a world class port, we need to have upgrades to the rest of our infrastructure, including the transportation links that serve our airport,” continued Coons.

“A fixed-link integrated transportation system can serve as a further catalyst for the transformation of Lax Kw’alaams, Metlakatla and Prince Rupert into an economically self-reliant and socially vibrant region, and as such this project ought to be a high priority for the government..”
Posted by . at 11:16 pm