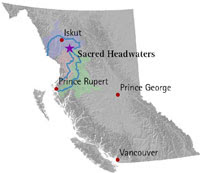 Shell Canada learned first hand last weekend that the opposition to their coalbed methane project is going to be large, proactive and more than willing to express their views.
A session held in Hazleton drew 400 participants over the weekend, the vast majority quite against the plans and their potential impact on the Sacred Headwaters.
A coalition of First Nations, anglers, guide outfitters and concerned citizens joined together to oppose the project which had been expected to get underway in May, but now has been postponed to at least August or September, with many calling for a further postponement until public meetings can be held between Shell and the residents of the affected areas.
The full story on the protests over the weekend were featured in Wednesday's Daily News.
Coalbed methane foes pack heated meeting
By Kris Schumacher
The Daily News
Wednesday, May 28, 2008
Pages one and three
Opposition to Shell Canada's proposed coalbed methane extraction project was loud and clear during the weekend as 400 Northwest residents packed Gitanmaax Hall in Hazelton, British Columbia on Saturday.
The Sacred Headwaters Summit brought together members of the Gitxsan, Tahltan, Wet'suwet'en, Tsimshian, Haisla, Carrier-Sekani, and Nisga'a nations, as well as guide outfitters, anglers and other concerned citizens, all united in their opposition to the prospect of coalbed methane drilling at the shared headwaters of the Skeena, Nass and Stikine Rivers.
Shell currently holds a 400-tenure for coalbed methane exploration, a project that opponents say poses more risks and delivers fewer benefits than any other project in the Northwest.
"It was a fairly lively and engaged group who definitely wanted Shell, and industry in general to understand that if they are going to come into their regions and territories, they deserve to be talked to and consulted with on these issues," said Des Nobels, chair of Friends of Wild Salmon.
"This event was an unprecedented demonstration of opposition by a united region. We hope both the B.C. government and Shell have heard the message that people do not plan to give up."
The day's keynote address was given by Jack Stanford, a salmon ecologist from the University of Montana who described how similar development has caused serious environmental destruction in his home state.
Greg Brown of the Pembina Institute also spoke about the probable impacts of Shell's project on wild salmon, and The Honourable John Fraser spoke from the floor to ask why the federal fisheries ministry had not taken a stand on a project that poses such significant threats to wild salmon.
Skeena-Bulkley Valley MP Nathan Cullen was also in attendance to deliver a message to Shell on behalf of his constituents, many of whom oppose the project .
"I think the opposition to Shell's plans in the Sacred Headwaters is growing with each and every day," said Cullen. "It was very informative and educational to be able to hear from experts on the issue, but I think it confirmed a lot of suspicions people had about the whole project."
Aside from Cullen, North Coast MLA Gary Coons and Skeena MLA Robin Austin, representation from the federal or provincial governments was noticeably absent at the summit, including the region's own MLA.
"Federal and provincial government are promoting this project, yet none of them seem to have interest or courage to present themselves," added Cullen.
Rhoda Quock, a member of the Tahltan Nation, spoke of her people's struggle against Shell, including road blockades and an ongoing court case, and told the crowd to a round of applause that they would not give up . More applause, feet stomping and cheering occurred when Shannon McPhail, executive director of the Skeena Watershed Conservation Coalition, invited people to show Shell that residents will stand in solidarity until the company withdraws its plans.
Head of Shell's Klappan Coalbed Methane project, Kathy Penny, spoke only briefly, stating she had heard many important messages, but gave no hint as to whether Shell would cancel its drilling plans. Shell had been hoping to begin drilling as soon as this month, but has agreed to hold off until August or September. Cullen said he and other opponents will push for a further postponement, at least until public meetings can be held between Shell and residents in affected communities, including as Prince Rupert.
Posted by . at 12:33 am