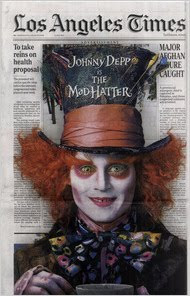 In a town where image frequently trumps substance, the image of the Los Angeles Times as a serious newspaper took a rather large hit on Friday, as the legendary California paper turned over its front page to the advertising department.

Friday's edition of the Times featured what is known in the industry as a cover wrap, in this case a full page advertisement for the Johnny Depp movie Alice in Wonderland, the ad designed to feature the visage of Mr. Depp pushing aside the news to a fashion, bursting through the middle of the front page in all his full visual Mad Hatter imagery from his motion picture.

The ad which is rumoured to have cost at least 700,000 dollars, has re-invigorated the debate as to what lengths newspapers should go in order to put cash in their coffers in these recessionary and changing times for the media.

The placement of the ad apparently caused much debate and consternation among the news executives of the paper who all had recommended that the paper not proceed down the advertising path of encroachment on the front page, it was an argument that in the end was not accepted by business executives at the paper who rolled the presses for Friday morning with Mr. Depp's intrusion to the normally sacred front page.

It's not the first time that the advertising department has over ruled the news and editorial division, past ads have appeared in the Times for the television shows Southland and True Blood, decisions which caused an uproar at the time and perhaps provide a clear definition now as to where the Times is planning to go with its corporate agenda.

In the news industry the times are changing very fast, yesterday's dependable source is now just another stop on the information highway, for some the pace of change is so fast that they can't keep up with it or address how it affects their long held beliefs in their media. For others the need to do whatever it takes to remain relative means that all those past beliefs are no longer valid.

The line between journalistic credibility and economic salvation apparently is getting thinner with each passing day, Friday the LA Times jumped over it once again, leaving a good number of its own employees to wonder just what that decision may mean for their industry and their craft.

For some the journey of the paper and that of Alice, is now almost one in the same, a place where the strange seems suddenly very common place.