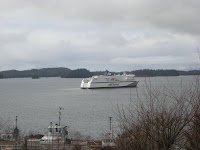 BC Ferries plans for the reconfiguration of its North - South sailings was the topic of discussion on Friday at a gathering of Northwest Mayors it Terrace.

The Mayor and his fellow political leaders of the Northwest met with a representative of BC Ferries as part of a Special Committee of the Whole of Terrace City Council. The purpose of the meeting was to examine and discuss the proposed bi-weekly ferry changes put forward by BC Ferries, which could see reductions in port calls in Rupert of up to twenty sailings.

It's that change in nature and reduction in service, that has set off the alarm bells with Mayor Mussallem and other Mayors along the Yellowhead highway corridor, who fear that such a drastic change to the sailing schedule could have dire effects on the hospitality industry and economies in general of the cities and towns along the route.

BC Ferries as part of their presentation put forward the concept of better utilising their new Ferry on the route by making Rupert and the Northwest more of a destination stop rather we imagine, than as the efforts of the past as a transportation conduit.

Be re-routing the southernd terminus of the run to Vancouver, BC Ferries is offering up the prospect of more tourism to the area from the larger centres of the Lower Mainland. A suggestion that Mayor says isn't universally shared by the Vancouver Tourism Association.

Mayor Mussallem also suggested that the Ferry Corporation develop better links with Via Rail and offer a circle route of tourism for the province, he also pointed out during the discussion that as far as he was aware, Via Rail had not been consulted by the Ferry corporation regarding their plans for the north coast service.

The topic of route re-configuration has been a controversial one in Prince Rupert as some of our past postings on the topic have indicated:

The website Terrace Daily online has  a full review of the events of last Friday in Terrace council chambers.
Posted by . at 11:01 am