A lecture series that fits all agendas to a tee -- shirt 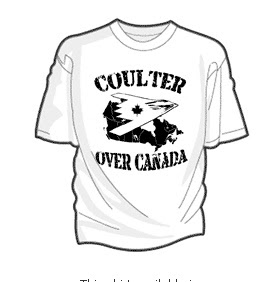 Ann Coulter's Canadian tour of insurrection has come to an end, wrapping up apparently in the warm embrace of Calgary conservatism, after the rather raucous chase out of Ottawa by that city's more enthusiastic of protest mobs.

Coulter has been on what turned out to be a two and a half city tour of Canada to offer up her particular brand of Conservative thought, a brand of social discourse that isn't everyone's cup of tea party kool aid.

Originally scheduled for sessions at the University of Western Ontario in London, the University of Ottawa and the University of Calgary,  the Ottawa gig was cancelled by Coulter's tour organizers when it was feared that her safety may be in peril at the hands of a rather robust gathering of those in opposition to all of her talking points. Chasing her out of the city as it were and leaving the University to pick up the pieces of the oft held belief that University campuses offer up the home for expressive thought, the sounding of issues and the give and take of debate.

None of which seemed to take place during Coulter's whistle stop tour of the nation's capital.

The trouble for the Ottawa U lecture came even before she had left London, with a letter from Francois Houle, Vice-President Academic and Provost, at the University of Ottawa reminding her of Canada's Charter of Rights and the limits of Canadian law on freedom of expression. A correspondence which of course was quickly leaked to the media, setting the stage for the theatrics to come in Ottawa.

Now we would imagine that the umbrage expressed from Ms. Coulter and her camp, was coloured by the past experiences of other far right conservative voices who have come up under the watchful eye of the Human Rights Commission in Canada.

The two most oft quoted cases involve columnist Mark Steyn and Journalist Ezra Levant (who incidentally was part of the tour organization for the Coulter sessions). Controversial hearings, which have tested the boundaries of free speech compared with the desire to root out hateful expressions of speech and ideology.

The optics of free speech interpretation, offered Ms. Coulter the red flag to wave and in true Matador fashion, the more radical of the student body at the University of Ottawa took up the challenge, leading tour officials (and perhaps nervous University administrators) to believe that trouble might come from Coulter's Ottawa visit.

Using that tempest as their guideline, the organizers cancelled the Ottawa lecture, ensuring that Ms. Coulter received what she most likely enjoys most, the highest level of publicity for her work, her causes and her ego.

As though delivered by the media gods, America's right wing media sources picked up on the story, Bill O'Reilly at Fox News made much from the Canadian tour... ... ...

As would be expected the ever bombastic Rush Limbaugh and the increasingly paranoid Glen Beck, all seemed to confirm in their own minds the state of fear that we apparently lead our lives in here above the 49th, feeding the stereotypes that seem to exist about Canada in the land to the south.

Based on the Ottawa University incident, Limbaugh and Beck in particular managed to somehow associate the protest with some kind of fomenting march of radical forces set to unleash their agenda on the United States itself.

One wonders if the Student Union association of Ottawa U knew it was so powerful, we suspect it will never be held in such awe again however as it returns to more mundane issues as keggers, tuition fees and maybe getting back to the books.

What the cancellation of Ms. Coulter in Ottawa has provided for however is a string of talking points for the right. convincing their believers that free speech is under attack, strengthening the resolve of those would continue on with the themes of Coulter, Limbaugh, Beck et al.

The sessions in London and Calgary while controversial, had none of the drama associated with the Ottawa visit, though the Calgary session had to move to a larger hall owing to the theatrics in Ottawa, a sure-fire win for ticket sales for Ms. Coulter.

Where the students in Ottawa missed the boat was in the opportunity that they had to counter the opinions of Coulter in debate, rather than shutting her down, they could have ignored her, which certainly would have sent a message that intolerance and right wing platitudes don't have a forum. Nothing says failure than a half empty auditorium of acolytes nodding in agreement.

Better yet, they could have attended the session and offered up debate on the issues that she opines upon, debunking her brand of conservatism, highlighting the narrow minded and misguided nature of many of her arguments.

Personally I don't find much in her work that provides for a basis of civility, nor reflective of an inclusive society seeking to solve problems rather than build walls between peoples. She takes her issues too far to the prism of the right to have any real hope of attracting the middle, let alone the left (though I suspect they aren't her main concern), yet without listening to her point of view one can't find ways to debunk much of what she says, by trying to shut her down she becomes a martyr for the right.

Instead of revealing much of her arguments as lacking in merit, the events of Ottawa made her a poster child for the debate over free speech, the protesters in the nation's capital took the bait so to speak and came out looking much worse on the issue than the subject who provided the elements for debate that they were seeking to expose as odious, obstinate and discouraging in the quest for better understanding.

At one time, University was supposed to be a place to exchange ideas, engage in debate and vigorously defend your point, in Ottawa the agenda seems to have been hijacked by more radical elements of the student body who gave Ms. Coulter much more publicity than she could ever have hoped to achieve on  your average dog and pony lecture series.

She may be leaving Canada shaken by what she believes is a lack of free speech, yet ready to challenge her treatment in Ottawa  with a filing at the Human Rights commission.

But we suspect most, that she leaves laughing all the way to the bank,  quite content as book orders increase and tee shirt sales sky-rocket. Not to mention providing much in the way of material for her on line website blog.

Her short tour of the mysterious north-lands, having captured the media attention on both sides of the border over the last 72 hours in a fashion that will only serve to elevate her spot in the pecking order of America's right wing media.

Leaving her to think that much was accomplished on her working Canadian vacation. A trip which by the time it had ended had pretty well everyone knowing her name, her issues and her thoughts.