Not near as much hype, but the same amount of passion 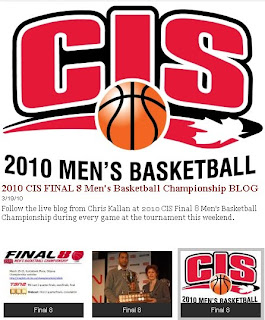 Over the weekend, Scotiabank place which normally hosts the Ottawa Senators of the NHL, will be the home for the top class in University basketball in this nation as eight finalists compete for the bragging rights of the game that has its roots not too far from the arena that they will play in this week.

And while the tournament generally tends to get lost in all the hype and promotion of the larger US march madness parade, the CIS season closer offers up as much excitement and thrills as the tournament that takes place to the south.

The major difference between the two, besides the obvious media coverage, is the fact that there are no real long shots that could steal the show, the one thing about the NCAA's March Madness that makes that tournament such a edge of your seat thriller.

Still the CIS finals can provide their own set of thrills, and you can follow that path over the weekend on TSN 2 or via a webcast set up by the CIS out of Scotiabank Place.

The eight teams participating in this years final weekend of CIS basketball are the host Carleton Ravens, considered one of the favourites to take the championship this year.

Challenging them for CIS Supremacey will be the Cape Breton Capers, UBC Thunderbirds, Windsor Lancers, University of Saskatchewan Huskies, Lakehead Thunderbirds, Calgary Dinos and the Citadins of the Universte de Montreal.

There won't be any local talent to follow this year as the CIS season comes to a close, while in years past Prince Rupert has sent a few players off to University basketball, none of the final eight feature any Rupert born players on their roster.

Still, to get a sample of the competitive nature of the CIS, the games are well worth a look, providing a sample for local high school students of some of the excitement of the game played at its highest level in Canada.

The CIS website features details on the schedule, match ups and television schedule, as well as background info on he teams and schools involved.

For basketball fans it might make for an interesting comparison between the two championships, the high profile coverage of the US version and the slightly less intensity of the coverage of the Canadian one, in the end though it is the game that actually wins, on both sides of the border.

The first game gets under way Friday morning at 9:30 am Pacific, the final one is set for Sunday afternoon at 3:30 broadcast nationwide on TSN 2

Rosters and Information on Participating teams