Tentative deal up for vote 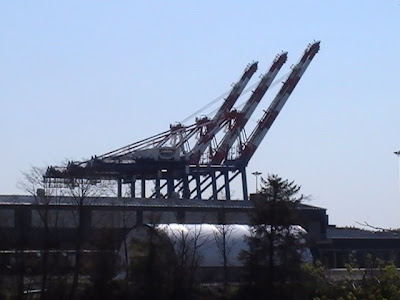 As we outlined here on the blog over the weekend, the two sides in the ongoing labour discussions on the west coast waterfront finally came to a solution to their differences.
On Friday the ILWU and the BCMEA put the finishing touches on a tentative agreement that will bring a sense of reassurance to the shipping community that BC's ports will remain open for business without a threat of a labour dispute, providing of course, both sides ratify the agreement.
Tuesday's Daily News provided some background on the talks and some of the fall out from the sense of uncertainty that they provided over the last two months, the story was featured as the front page headline item.
B. C. PORTS REACH TENTATIVE DEAL WITH LONGSHOREMEN
Following lengthy talks, certainty now looks to have returned to the province's waterfront.
By George T. Baker
The Daily News
Tuesday, February 17, 2009
Page one
The British Columbia Mariners Employers Association (BCMEA) and the International Longshore Workers Union local 514 have come to a tentative agreement.
According to the BCMEA vice president of marketing and information services Greg Vurdela, the deal was reached after mediation yesterday between the union and employers.
In October, federal mediators William Lewis and John Rooney were appointed by federal Minister of Labour Jean-Pierre Blackburn to help bridge a deal between the two parties but it took four and a half months to finally reach the tentative deal.
Vurdela said he could not reveal details in the agreement at this time.
"With respect to our customers and the union, who still need to ratify the agreement, we cannot comment at this point," said Vurdela.
The ILWU local 514 had voted for strike notice in late December and were legally able to strike as early as Jan. 2 but the local had avoided doing so, instead working through the negotiation phase of the collective bargaining agreement.
Should the deal be ratified, it would avert what potentially could have been a devastating strike at the Port of Prince Rupert and Vancouver.
It was estimated that 5,000 workers would have walked off the job in both cities as the 450-member dockworkers and foremen union strike would have closed the ports completely because other union members would not have crossed the picket line.
Pension payments and working conditions were the two biggest items and Vurdela said once the deal is officially signed, the details of the agreement might be released.
An industry expert, Captain Stephen Brown of the Chamber of Shipping, said that B.C. ports had lost 20 per cent of their business because of looming strike action.
The last time there was a major port strike was in 2005, which the provincial government argued was costing B.C. tens of millions of dollars per day.
Posted by . at 12:01 am