Is there a doctor in the house, or at least in town? 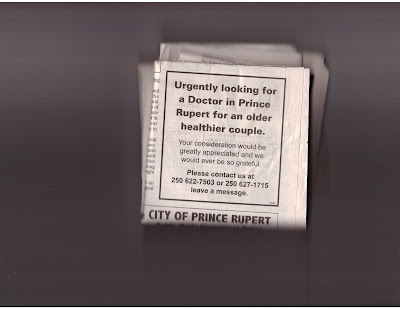 It perhaps is the most declarative statement yet, that the ongoing doctor's shortage in Prince Rupert is starting to show the large cracks in health care in the city.
A page three advertisement in Friday's Daily News, asking for consideration by any of the city's remaining doctors to take on a healthy elderly couple as patients.
The unusual request in the pages of the paper, underline the growing sense of frustration for city residents, many who now must call the Prince Rupert Regional Hospital Emergency ward as their medical office of record, this after a number of departures on the local medical scene.
The already overburdened emergency department probably doesn't need the workload, but when you're sick you have to go someplace; and with fewer and fewer doctors available locally and those that remain not taking new patients, there really are few options left for locals.
Back in September there was much made of an announcement from the province that some form of relief was soon to be on the way, but as we head into February it would seem that we aren't any closer to a resolution to the problem than we were then.
.
The ongoing shortage situation which has yet to be fully addressed by Northern Health officials, never seemed to fully resonate with the last council and has yet to become a major concern for Prince Rupert city council, leaving residents to take matters into their own hands, hence the advertisement in Friday's paper.
Council received a briefing in January that there might be some hope on the horizon, but so far the situation seems to be getting much worse instead of better with the closure of the Green Clinic.
We doubt that Northern Health in Prince George has home delivery of the Daily News, so perhaps council could forward a few copies to them and maybe spend a few dollars and send some copies to the Minister of Health and the Premier for their perusal.
.
The plea for help makes for a powerful testament if you will, that there is a serious situation that needs to be resolved quickly.
Posted by . at 8:56 am