The Inlander may yet rise again 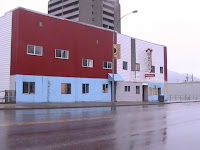 A fate that more than a few residents might find hard to believe considering the history of the building and the frequent attention it has received from city council over the years.
The Daily News provided details on the latest developments on the Inlander in Thursday's paper.

Cause of the Inlander fire is still being investigated
By George T. Baker
The Daily News
Thursday, February 12, 2009
Pages one and two
Could the Inlander fire that forced at least six Rupertites to find new shelter have been deliberate?
According to the city's top fire officer Ron Miller, an initial investigation by the Prince Rupert Fire Department after the Inlander hotel corner-unit burned last week has led fire officers to believe it was suspicious.
"Basically, it boils down to the location and the area of origin was in a location that would not normally have ignition sources," said Miller.
What makes the fire suspicious was that it started in a location that normally a fire would not start in and that the fire department wasn't able to clearly define what started the fire. Almost any such fire would require further investigation.
Miller was careful not to say there was anything more to the investigation, other than to say there are unanswered questions about the cause of the fire. He said that after his deputy chief had completed the investigation with the RCMP on scene, it was determined that police investigators would continue the investigation.
Anyone near or living in the building would be interviewed during the follow-up.
"Certainly, the police - who may have already done this - would conduct interviews with people who were in the area and see what they can find," added Miller.
At this point, Miller said that the hotel is not habitable, but it has not been condemned.
The fire began in a bottom corner unit of the hotel at about 2:40 p.m. last Wednesday. Because it started on the bottom floor of the building, the smoke filled the halls and each floor and created extensive smoke damage.
"The heat and smoke damage was throughout the building and especially the smoke damage and because the fire began in the basement of course fire goes up," said Miller.
The owner of the building has been informed that if certain upgrades are carried out to the Inlander, the building could possibly be made ready for the residential living units in the building to be reoccupied.
According to Miller, 13 fire officers in total responded to the fire.
None of the firefighters were injured during the battle with the blaze and no occupants were hurt either.
Posted by . at 11:51 pm