Sell a little, to save a little? 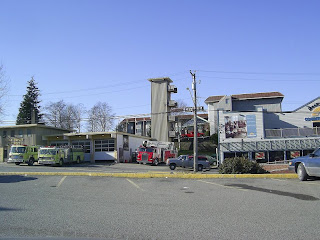 .
The Mayor has a list and he's checking it twice and when he's finished the clearance sale may require some advice.
From the Skeena Queen Charlotte Regional District offices and Pillsbury House, to the Fire Department's Bronto Skylift truck, Jack Mussallem is ready to move some inventory.
It's the Mayors hope that his reduction of assets will help to push an extra two million dollars into the city's coffers, providing the city with a bit of a cushion from having to increase taxes yet again for the city's residents. He suggests that if his wish list of divestment isn't granted by council, then there is the possibility of at least a four per cent tax hike in the offing.
While those tax payers may not have a problem with the idea of selling off a few buildings to reduce the burdens, the prospect of selling the only fire truck in the city that can reach higher hot spots during times of a fire might be a harder sell.
With the Inlander fire still fresh in resident's minds, the idea of selling off some of the fire department's rolling stock might not be particularly well received, well especially if there is no replacement in line to pick up the load.
The past spending of former councils in the form of real estate both fixed and land is what has put the city in the deficit situation it finds itself to be in these days, from the Cow Bay lands (now functioning as a parking lot for the time being) to the share of the Cruise ship dock and the purchase of the Museum of Northern B. C. building, real estate seems to be the anchor weighing down the city's ability to invest in infrastructure.
The Northern View highlighted the Mayor's financial thoughts with an item posted on their website which includes some of the infrastcuture projects that need immediate attention from the city, while Friday's Daily News featured the financial process ahead with an article in Friday's paper.
Mussallem looking to liquidate city assets, property
By George T. Baker
The Daily News
Friday, February 6, 2009
Pages one and five
Mayor Jack Mussallem says he has two options: either he raises taxes or sells off some of the city's goods. But something needs to be done to strengthen the city's finances.

Making good on a campaign promise, Mussallem said it is his desire to move the city away from ownership of what he thinks are unnecessary infrastructure such as the Skeena-Queen Charlotte
Regional District office, Pillsbury House and the Fire Department's Bronco Skylift.

Prince Rupert's current long-term debt sits at $8.7 million and is made up through lease obligations and debentures money owed to a lending institution through loans, which the city owes for larger facilities in towns.

"Our largest concern right now is our infrastructure, for our sewers and our water, roads. Those are the sorts of things we are looking at," said Mussallem.

Mussallem said that, right now, the city is $100 million behind in its capital plan, which had him worried because 10 per cent of all of the city's infrastructural needs are in 'critical' situations.

Some of the infrastructure that needs to be fixed includes Hays Creek bridge, which had some work done on it last summer but, according to Mussallem, is still in need of attention.'

And the laundry list includes a combination of sewer and road fix-ups that the city must attend to immediately.
Mussallem said if he doesn't get city council's approval to sell some of the infrastructure that he has listed, locals can expect a tax rate raise of at least 4 per cent. One regional district representative isn't happy that Mussallem is floating the idea of selling the regional district office in the public before he has brought it before the district's board.
Area "A" representative Des Nobels said he doesn't like the sound of moving out of the current address.
"It would be good if they told us instead of just booting us out," said Nobels.
Mayor updates city's financial status and proposed projects list
By Shaun Thomas
The Northern View
Published: February 05, 2009 2:00 PM
Updated: February 05, 2009 2:59 PM
.
Prince Rupert Mayor Jack Mussallem took time on February 4 to provide an update on the city’s financial situation, as well as provide an idea of some of the projects being looked at for 2009.
“The short-term deficit has existed for a number of years and was the result of unpaid pulp mill taxes in the amount of $22 million. By the end of 2008 the City managed to get that outstanding deficit down to zero, and that’s really an acknowledgment of prior city councils and the work of staff,” he said.
“The city’s current long-term debt is $8.7 million and it’s made up of lease obligations and debenture debt…The upland development, the three pieces of property the city owns in Cow Bay that are for sale, there was $982,000 done in improvements there. The cruise ship dock, the municipal portion we are obligated to is $2.9 million and the purchase of the museum, the outstanding obligation there is $2.2 million. The new water main, the outstanding debt there is a little over one million.”
However, he noted that the city is about $100 million behind when it comes to the infrastructure plan. That has left 40 per cent of the city’s infrastructure, including road, water and sewer, in bad shape and another 10 per cent in “critical” condition.
“That 10 per cent, if we don’t do anything we will continue to have emergencies every year,” he explained.
“One thing that is concerning is that the City, on average, is seven times more likely to have a water line break than the average municipality in Canada.”
Amongst the proposed projects to be considered for 2009 to address infrastructure needs is a $140,000 cell refit at the RCMP station, $180,000 on waterfront trail upgrades, $119,000 for cruise initiatives upgrades, $62,000 for Hays Creek Bridge, $400,000 for landfill expansion, half of $324,000 for upgrades at Rushbrooke, $235,000 for waterline replacement on 8th Avenue East, 1/3 of the four million price tag for the Hays Creek sewer replacement, $28,000 for arena roof replacement and $275,000 for sewer line replacement. Some of the projects, like the $240,000 water line replacement, have already been done, while others are expected to be helped with funds from various grants.
In order to raise funds to help offset the costs, Mayor Mussallem said he will ask council to consider selling the Regional District building, the Pillsbury House and an aging Bronto Skylift owned by the Fire Department. By selling these three items, Mussallem expects the city could see an additional $2 million into the coffers.
“We may have to [raise taxes if the properties aren’t sold]. I am very concerned that if we don’t do something in the most expediate manner possible, bearing in mind that all budgets have to have some balance to them, I would hate to have people looking at a four to six per cent tax increase. That is a very great concern to me,” he said.
“Municipalities can’t run deficit, we have to run a balanced budget. If we have anything we can’t fund through our operations, then that is representative of a tax increase to the citizens. And a tax increase at a time like this is always a concern, and is not taken lightly…We still need to be mindful of what people can pay in taxes.”
In terms of Watson Island, Mayor Mussallem said the city may end up with $3 million of taxes owed, but that cannot be considered because “we have no indication at all as to whether or not the taxes will be paid on the property”. If the taxes are not paid by September 29 of this year, the City will take possession of the property.
“There are a number of things for council to consider in its budget, but you can tell from the dollar amounts that this is significant.”
“At the same time our objective still is to keep debt down and to reduce debt by divestiture of properties and then use that money as needed. As you can see we are $100 million behind on infrastructure, and that is now the municipality’s main concern,” said Mussallem
Posted by . at 2:09 am