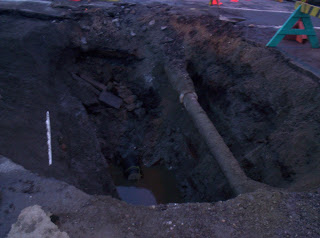 The requirement to have matching funds, could in the end slow the progress of any plans for Prince Rupert to capitalize on the recent Conservative Federal budget.

With the finances for the city as tight as they are these days, providing for our share of the infrastructure kitty is something that the Mayor is trying to find a way around in order to take part in that great trans-Canadian quest for money.

A number of items would be on the Prince Rupert wish list, from the much discussed Hays Creek Sewer project, to the usual fall back of infrastructure programs the paving of city streets.

He outlined some of his thoughts and concerns in a front page, headline story in Friday's paper, including the observation that staff shortages may be playing a role in the slow pace of grant acquisition, funding and progress for local projects.

A suggestion that former Mayor Herb Pond was fond of reminding us over the last few years as the city struggled with its budget and the dwindling tax base of the city itself. It will be interesting to see how the public reacts to the prospect of more staff being required, funded from a tax base that is already among one of the highest of tax payers in the province.

Benjamin Franklin once said "he that can have patience can have what he will," and Mayor Jack Mussallem is hoping that there will be some truth to that.
Mussallem isn't writing off the budget yet.

The city could see a 60-job benefit through federal funding if the province steps up to help the local government's shallow coiffures.

The Mayor of Prince Rupert said he is taking a long hard look at what the federal government is offering to municipalities through its Budget 2009 and while he isn't happy with the lack of access to grants, he said the City of Prince Rupert is in place to move forward in 2009.

"We are of a slightly different mind than the (federal) government is and, obviously, they could not come to terms with our requests with grants and how you have to have shelf-ready projects," said Mussallem.

When federal Finance Minister Jim Flaherty announced this week that municipalities could apply for infrastructure grants through matching grants, Ottawa effectively rejected what many smaller and rural communities were begging for: federal money without the need to match it with local funds.

Flaherty ignored that request, suggesting that it was up to local communities to show they could pay for at least one-third of any infrastructural project on their own.

But the Federation of Canadian Municipalities has conveniently made a list available for Prince Rupert - and other B.C. communities - that is accessible online.

According to the list, Prince Rupert is looking at $5.25 million worth of shovel-ready projects that could use federal funding, the biggest one being the $4 million required for the Hays Creek Sewer Project.

That project is estimated to create 46 local jobs, and combined with the other two projects (landfill development and residential road paving) would create a total of 60 jobs for the local economy.

Competition for federal funding will be fierce.

And cities will have to go up against Metro Vancouver, with a population base of 2.3 million people, which is looking for $40 million worth of funding for a regional organics processing facility alone. That project would create 457 jobs.

Mussallem said the city is talking to the province about infrastructure projects and was in meetings with BC Rural Secretariat representatives. He said Prince Rupert had also been looking for funding through Community Futures.

The city is looking to move forward on some projects, including the Mariners Memorial Park project, which was announced last year when Premier Gordon Campbell stepped up with a cheque of more than $182,000 for upgrades to the park.

Among the upgrades slated for the park is a bandstand.

Mussallem said he wouldn't discuss the other projects on hold for fear of partners not getting the funding on time, which might delay improvements for another year.

"The city has received funding on certain projects that we haven't enacted upon," said Mussallem.

According to Mussallem, staff shortages are part of the problem, slowing down some of the projects that need to be implemented.
Posted by . at 8:55 pm