Seeking to shift vessels on the Rupert to Skidegate run 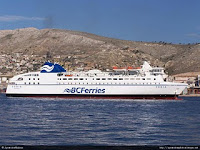 NDP MLA Gary Coons has introduced a petition from the North coast, which has the names of 765 Haida Gwaii islanders seeking to have the Northern Expedition replace the Northern Adventure on crossings of Hecate Strait.

The North coast MLA provided the list to the Legislature on February 11th, after Island residents expressed their concerns over the reliability and safety of the Northern Adventure in Northwest waters.

That concern has increased, after a terrifying ordeal at sea in November as the Northern Adventure became caught up in Hurricane force winds and was forced back into Port in Prince Rupert.

In their request, they outline that the Northern Expedition was specifically designed and built for the challenges of the Northwest marine environment, while the Northern Adventure is but a refurbished vessel best know for its trips in the calmer waters of the Caribbean and Mediterranean.

Those are issues that were raised at the time of the purchase of the ferry once known as the Sonia, but dismissed by BC Ferries as of no particular concern.

As for the November incident, BC Ferries has reviewed its communication policies and will be seeking more detailed and improved weather forecasts and provide better communications with their customers.

The fate of the petition will most  likely be known once the Legislature gets into full swing later this week, but the likelihood of BC Ferries making the switch seems remote.

Queen Charlotte Islands Observer-- Petition for Northern Expedition presented to Legislature
Posted by . at 2:42 am