Number one with the bullets! 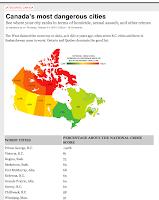 They've been described as the Transportation hub of Northern BC,  The Gateway to the North, British Columbia's Northern Capital and now, once the next edition of Maclean's is out on the news stands, Prince George will have a new title to add to it's positioning statements.

If you're looking to walk some mean streets, they apparently are but eight hours away down Highway 16 east, as Prince George's crime rate spikes upwards moving the city from number four to number one, an honour that surely wasn't on Mayor Dan Roger's wish list when he was elected to office.

The Mayor and the RCMP held a press conference on Thursday, outlining the steps that are being taken to make their time at the top of the list as short term as possible, though clearly the city's RCMP detachment has its work cut out for it.

As we reviewed last month on the blog, part of the city's growing reputation for crime stems from what appears to be the carving up the region among a variety of gangs, a situation that recently made news as Prince George RCMP made key arrests on weapons charges of an alleged top member of one of the regions infamous gangs.

The situation in Prince George also has appeared on the radar of the Lower Mainland Gang Task Force, which last month made a very public sweep of the city, designed to show the city's criminal element that they were going to find conducting business in the city a more difficult venture in the future.

The very public presence of gang activity in the city was the focus of that press conference yesterday, with the city's Mayor pledging that the City will do all it can to eradicate the root causes of gang activity in Prince George. To that end, there is a Gang Summit set for November 1st and 2nd , when a number of Prince George groups and individuals will explore ways of taking control of the worrisome situation.

And while the predatory nature of the gang situation is of main concern to the city other criminal activity should be of concern as well.

The Maclean's issue will base it's data on 2009 statistics, compiling the numbers from six categories including, Homicide, Sexual Assaults, Assaults, Robberies, Break and enters and Vehicle theft.

Many of those may be indeed be gang related, but some are also an indication that there may also be a number of other social and economic factors involved in the city's new found reputation.

Regardless of the underlying factors, there clearly is a problem that needs to be addressed, if Prince George is to relinquish its title in as short a period of time as possible.

The Maclean's articles can be found below:

The following, are some of the reviews from Prince George's media outlets which found much to comment on following word that Prince George was about to make the cover of the news magazine.

**Photos above include Maclean's main page for their dangerous cities feature and a photo posted to the RCMP website's press release outlining the reaction of the city and RCMP to the Maclean's articles.
Posted by . at 8:35 am