And by their tattoos they shall be known 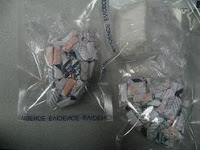 Police have learned that the GTS level and structure can be identified by their GTS tattoos. The lowest level member of the GTS can be identified by a Cross with no other writing. Mid level members of the GTS will have a Cross, GTS and PG insignia (Prince George). The highest level members of the GTS are the “Original Gangsters” who have a Cross, GTS, and OG insignia ( Original Gangster) FIKE's tattoo is a Cross, GTS, and OG. -- A portion of an RCMP press release from the Prince George detachment providing some background on the gang situation in that city. Prince George RCMP made a significant arrest this week in their ongoing efforts to combat the growing gang presence in that city.

On Friday in a wooded area near the Lower Mud River bridge in Prince George, the combined efforts of that city's GIS Drug Section, Crime Reduction Team and North District Drug Section  resulted in the arrest of a male and female on a number of drug and firearm offences.

When the processing was done, Prince George RCMP relayed details regarding the arrest and outlined some of the 25 charges facing one of the alleged leaders of the Game Tight Soldiers, one of the more notorious in Prince George's current gang structure.

An RCMP press release issued this weekend identified 30 year old Eric James Fike, as the alleged leader of the Original Gangsters, while the press release also provided some insight into the scope of the investigation and the worrisome amount of firepower that seems to be part of the gang culture in that city at the moment.

Taking into custody a high profile suspect in this case has once again highlighted the gang situation in Prince George, which has seen a spike in violence over the last few months and has provided for a rather bright spotlight to fall on the city from a variety of the province's media outlets.

The events in Prince George over the last week have provided for a number of articles about that gang and its migration from the downtown east side of Vancouver to Prince George  in recent times, some of those articles can be found below.

(Photo above from RCMP press release)
Posted by . at 9:01 am