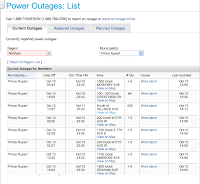 Residents of Prince Rupert and many other North coast communities were without power for a good portion of Sunday after a violent windstorm raced across the region, leaving a trail of destruction in its wake.

The storm which arrived on the north coast shortly after midnight, knocked out power at 12:30 taking down power lines, trees, business awnings and in some cases destroying roofs across the city.

The night sky in Rupert was lit up with short bursts of what seemed to be sheet lightning and the scattered bursts of transformers or power lines suffering damages in the flow of the strong winds,  featuring hurricane or near hurricane like gusts which at times seemed to come from all directions.

Early morning light brought out the community to assess the damages with many finding shingles ripped from their roofs in the overnight period, some residences suffered even more damage with trusses exposed in some locations. Sunday afternoon echoed with the sound of hammering as Rupertites took to their rooftops to effect emergency repairs. Roofing crews in the city can anticipate a full work week ahead as those that suffered damage assess their own situations.

Downtown businesses suffered damaged signs and some roofing issues, while storage yards on the outskirts of the city featured tipped commercial trailers, and damaged cars and motor homes. Port Edward suffered damage in the District's trailer park area, with a number of mobile homes shifted off their foundations, some destroyed.

Anything that was not properly secured was quickly scattered throughout the city's neighbourhoods, and even properly secured items managed to break free from their moorings, some causing vehicle or home damage..

City works crews had some streets in the city blocked with concerns over trees some of which were brought to the ground or continue to dangle dangerously.

City residents formed long lines at local gas stations, convenience stores and at Overwaitea the only grocery store in town to open after the storm,  the Safeway location still blacked out late into the afternoon.

The plans for many Thanksgiving weekend dinners were delayed through the morning and into the afternoon, as BC Hydro crews worked to restore power, finally bringing back the electrical currents shortly after 1 pm in most regions of the city.  Other outlying areas are still without power, with a variety of times provided by BC Hydro as to when power may be restored.

At the height of the power outages, the blackout comprised the entire portion of the province from Smithers west.  A full review of the BC Hydro power situation can be found from the Hydro website.

Local residents offered up their experiences from the storm on the local information portal htmf, which provided a number of photos of damage in the region. On line forum participants such as this one, offered up their own archive of photo's from Saturday nights storm.

The weather for the remainder of the Thanksgiving weekend is not quite as exciting as the overnight period brought to the region, though it will remain windy through to the start of the work week,  overnight gusts are expected to be at around 60 to 80 km/h after minding.

While we can expect 60 mm of rain by Monday evening, he storm continues to be more of a wind event as rainfall amounts on the north coast are not the same levels as those to the south.

Natural Gas service to the region  will be a concern over the next few days as Pacific Northern Gas explained that repairs are needed to it's main pipeline between Prince Rupert and Terrace, PNG advised on Sunday that it had curtailed gas use to its industrial and heavy commercial customers in the Prince Rupert area. Service interruptions to residential users could be required as the supply lines slow.

BC Ferries held the Northern Adventure in port overnight as the storm passed over the Northern Vancouver Island area, the vessel departed Port Hardy at 8 am and is anticipated to arrive in Prince Rupert at 1:30 am.  The Northern Adventure will then depart for Skidegate at 5 am.  Further schedule advisories can be found on the BC Ferry website.

Highway travel into the Nass has been disrupted as well, with the Nisga'a Highway closed in both directions north of Terrace due to downed power lines on the route. Further updates on road conditions can be found on the Drive BC website

Reviews of the nights weather related mayhem have begun to roll in:

photos mapped by gps geotag can be found here. www.flickr.com/zpaperboyz

That was kinda scary