Mr. Campbell's version of the fire side chat set for the end of the month 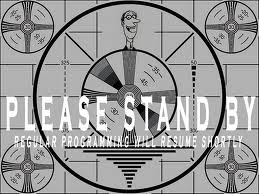 It's going to be take two when it comes to message delivery, as Premier Gordon Campbell takes to the Global TV airwaves later this month, to expand on and perhaps deliver a more stirring review of his plans than the recent UBCM session provided for.

The Premier has asked for television time at 7 pm on October 27th to deliver what has been described as  a "rare state of the province address".  And rare it is, the last time the Premier spoke to the province was almost two years ago on October 24th, 2008 when he held a televised session on how the province planned to cope with the Wall Street economic meltdown and the global impact of it.

His speech this time around will most likely try to address more local concerns (ie: items of worry for the Liberals at the moment) and is expected to try and recover some ground in the polls from the NDP after the Liberal's less than successful HST strategy. It may also offer hints as to what may be in the Premier's political future.

Among the topics that the Premier intends to share thoughts on will be such issues as the economy, education and the future of the province. Speculation is growing that the Premier will also offer up an apology for his party's dreadful introduction of the HST program, which has been so badly handled that it even managed to bring former Premier Bill Vander Zalm back to political life.

Nothing it seems can scare a politician more than seeing the equivalent of the Political zombies once again walking among the living.

With Mr. Vander Zalm continuing on with his anti HST crusade with a selective (and apparently costly) recall campaign, one imagines the Premier will try to reintroduce the HST discussion and quell that storm, by focusing on the impact that it may bring to such vital issues as education and health to name a few.

With the Liberals buying themselves a year of time before a referendum on the issue, the months leading up to the September 2011 vote on the issue will most likely feature much in the way of how the HST will in the long run benefit the province and it's budgetary requirements. The Premier may wish to lay some of the groundwork towards that thought and the vote with his address at months end.

Whatever he says, Liberals will be hoping for a better response than his UBCM efforts produced, as we outlined on the blog on October 2nd, that speech didn't seem to resonate to much with the delegates, nor the media. With some commentators suggesting that it was the kind of speech one gives as they are heading towards the exit.

October 27th will provide the Premier with a second chance on that theme, either to reinforce that these are his winter days of power, or to pull his political ambitions off the mat and make the case that he intends to try and reclaim some of the momentum he once had when he first took over the leadership of the party and the government of the province.

With his current popularity levels low in the polls and as the controversy over the HST swirls around him, the month end speech will provide a signal that both those inside the Liberal party and outside of it will be watching for with great interest.