Ready for another blustery day? 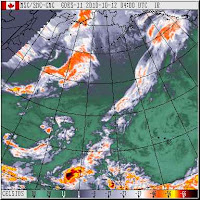 North coast residents will be keeping an eye on the skies Tuesday as Environment Canada issues another Wind Warning for the North Coast and Haida Gwaii.

The forecast issued at 9:55 calls for winds from the Southeast set to develop through early Tuesday morning, part of a low pressure system tracking west of Haida Gwaii.

With the latest winds will come a fair amount of precipitation, Overnight there will be 20 mm with winds from the southwest 40 to 60 km/h.

Tuesday's forecast  calls for rain, at times heavy with amounts up 40 to 50 mm. Winds will be from the southeast 60 to 90 km/h through the morning, decreasing to southwesterlies 40 to 60 near noon.

Tuesday night will bring more periods of rain, though amounts will only be around 5 mm, with windy conditions continuing.

The next weather system rolls through after a weekend to remember for local residents, many whom may still be cleaning up from Sunday's early morning windstorm.

The Wind Warning posted to the Environment Canada website reads as such:


Southeast winds up to 90 km/h will develop Tuesday morning.


This is a warning that potentially damaging winds are expected or occurring in these regions.


An intense low pressure system will track west of Queen Charlottes early Tuesday morning. Southeast winds 60 to 90 km/h will accompany this system and will affect exposed areas of the Charlottes and the north coast during the morning hours.


Winds will gradually abate near noon as the low pressure system moves to the gulf of Alaska.
Posted by . at 9:45 pm