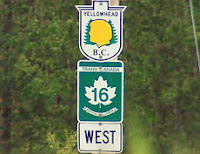 "The RCMP is fully committed to pursuing each of the identified investigations in order to bring successful conclusion to as many of the investigations as possible and closure to the families." -- RCMP Chief Superintendent Richard Bent speaking to a number of family members waiting for news on the Highway of Tears cases.
RCMP investigators provided an update to the families of those that have been murdered or have disappeared along the stretch of highway 16 known as the Highway of Tears.
The latest meeting between the families and the RCMP took place on Thursday, with RCMP officials reassuring the families that the investigations continue, though they had no breakthroughs to pass along at this time. The most recent meeting was the fifth one to take place since a Prince George symposium in 2006.
The RCMP created an investigative review team in 2004 to examine the eighteen reported cases that have raised concern along the Highway 16 corridor, the eighteen cases go as far back as 1969 with the last reported case file registered in 2006.
Thursday's meeting provided details on forensic and laboratory results as well as other details pertaining to the numerous cases still open, the budget for the ongoing investigation has been increased to 3.6 million dollars for 2008-09, prior to that the investigators had spent 2.1 million dollars since 2005 in their quest for answers and closure for the family members of those that have been murdered or gone missing.
Opinion 250-- Families of Highway of Tears Missing or Murdered Get Update
Vancouver Sun-- 'Highway of Tears' budget boosted
Posted by . at 1:00 am