Rainbow Responder replacement on the horizon 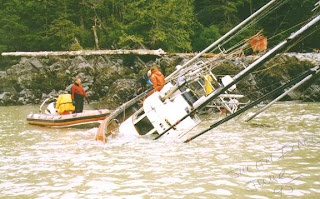 There is still a bit of fundraising to complete, but a new ride has arrived for the Prince Rupert Marine Rescue Society which has introduced a new vessel to patrol the waters of the North Coast.

The 20 year old Rainbow Responder had been a welcome sight on the north coast for the last two decades, but the new vessel will provide much more modern conveniences and abilities for the rescue society.

They currently are seventy thousand dollars shy of the 300,000 dollar purchase price, with a number of fund raising plans in the works all designed to cover the cost of bringing the vessel to the north coast.

The Daily News featured details on their plans in Monday’s paper.

Prince Rupert has been fortunate to have a reliable Auxiliary Coast Guard boat in the Rainbow Responder for the past 20 years, but soon the city will reap the benefits of a brand new replacement vessel.

﻿Recently the Prince Rupert Marine Rescue Society (Coast Guard Auxiliary) successfully secured significant funding from BC Gaming Corp. towards the purchase of a new rapid response vessel to replace the venerable but aging Rainbow Responder. The 23-foot rigid hull inflatable Responder was purchased by the Society in 1988, and in that time has been used to perform well over 300 search and rescue missions.

According to Soceity Director Geoff Gould, the new vessel will be manufactured by Titan Inflatables, the company that supplies Canadian Coast Guard certified vessels along the west coast. However in order to purchase the ves﻿sel, the PR Marine Rescue Society must raise another $70,000 before the $300,000 vessel can be launched in local waters. In addition to planned fundraising drives, the group is seeking corporate donations to help fund the purchase of this much-needed vessel.

﻿The new vessel, which will comply with modern Coast Guard standards, will have a heated interior, which Gould said is crucial for assisting hypothermia patients. It will also include state of the art electronic search and rescue equipment, and an estimated top speed of 40 knots (75 km/h). The addition of this new vessel will allow the Society to continue the work it has been doing since its formation in 1986. As Prince Rupert is one of the most northern and remote locations on the British Columbia coastline, the local unit is a particularly valuable resource in time of crisis. This unit is on standby year round, 24 hours a day, seven days a week, and responds within minutes to assist people in distress.

The Prince Rupert Marine Rescue Society is a part of Canadian Coast Guard Auxiliary, a nationwide organization of volunteers, and provides services to commercial and recreational users of the waters surrounding Prince Rupert and along the North Coast. In addition to seeking individuals interested in contributing to the worthwhile project of securing a replacement for the Rainbow Responder, the Society is also always looking for new members. Those interested in joining the Society or making a financial contribution can contact Geoff Gould at 250-624-4138, or by email atquality@citytel.net. The Prince Rupert Marine Rescue meets the second Wednesday of every month in the hut behind the Performing Arts Centre Parking lot.