The Messenger takes the message to Ottawa 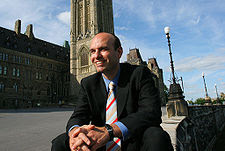 NDP MP Nathan Cullen will return to Ottawa with a full list of feedback from his recent tour of the Northwest, a string of meetings in communities across the Skeena-Bullkley Valley riding where local residents outlined what they wanted to see from Ottawa in these troubled times.
The Prince Rupert stop of the tour was last Thursday night at Northwest community College, where Cullen and a group of local facilitators put together the North coast perspective on where the Harper government should allocate its budget dollars.
High on the local list was a revision of the Employment Insurance requirements in this region to better reflect the troubled state of the employment picture these days, the key to that coming from the group was a need to lower the number of hours required at work to qualify for Employment Insurance.
That and a number of social and economic issues were featured in a front page headline story in Monday's Daily News.
OTTAWA SET TO HEAR NORTH COAST’S BUDGET WISH LIST
Nathan Cullen taking the message back to parliament to relay to the Finance Minister
By George T. Baker
The Daily News
Monday, January 19, 2009
Pages one and three

Nathan Cullen's tour, branded the "Economic Riding Tour", rolled its way into Prince Rupert Thursday night for a colorful evening about a serious topic; the economy.

Cullen was asking his local constituents for answers to six central questions he plans to bring to Ottawa before the Jan. 27 introduction of the budget by Minister for Finance Jim Flaherty.

"My biggest concern is that they are going to push a lot of money out the door and it is going to be wasted," Cullen told audience members at the Northwest Community College.

After Cullen's opening speech, the audience broke into six separate groups with a facilitator leading the discussion along with both white paper and felt markers to compile lists of wants under each banner: taxes, bailouts, infrastructure spending, small business, social safety net and environment.

﻿Under 'bailouts', the discussion was about the role of government in corporate enterprises. TRICORP's chief operating officer, Peter Lantin, summarized that the group wondered if bailouts fit properly within the ideology of a capitalist county.

The most popular group was the 'social safety net' group, which was very concerned with what would happen to the people with the most to lose in an economic downturn.

Group facilitator Bobbi Parnell reported that the group was particularly focused on the issue of employment insurance (EI).

They urged Cullen to express to pol﻿iticians in Ottawa that Rupertites need greater access to EI assistance, through the lowering of work hours needed to qualify for EI funds.

City council was well represented at the forum, with Mayor Jack Mussallem there along with Coun. Kathy Bedard and Coun. Joy Thorkelson and they all took part in the general discussions and the individual groups.

Thorkelson was particularly vocal about the question of El, saying that what applies to central Canada does not often apply to the North Coast residents.

﻿According to Thorkelson, there were only 15 shore workers out of a possible 2,000 who received EI benefits in 2008. She said locals have been living with gloomy economics for the last five years, well ahead of the national curve and that without real answers for local problems, it was difficult to deal with them.

﻿"We need lower numbers of hours for people to qualify (for EI)" said an impassioned Thorkelson to Cullen.

"There are no young people here.

Cullen is touring nine cities and towns across the Skeena-Bulkley Valley riding and will report his findings to constituents in a letter when all the information is compiled.