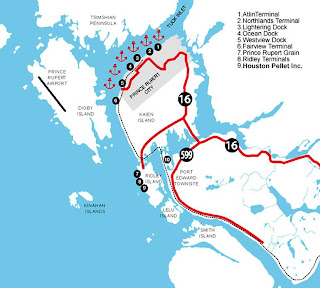 It's a new year, a somewhat new political crew on council, a new mayor and an old dream.

Picking up the Tsimshian Access Project torch from former Mayor and would be MLA Herb Pond, Mayor Jack Mussallem has once again put the prospect of a bridge to Digby Island and road beyond to Lax Kw'alaams high on the municipal wish list.
.
Mussallem, joins the long list of local politicos who has the dream of a bridge over the harbour as his political goal, but while somewhere in the offices of 3rd Avenue are probably those original blueprints for when the project was first floated, the financial picture of the project certainly has changed quite a bit from the heady days of economic stability on the North coast.
.
In order for an infrastructure item such as the bridge to go forward the city would need to provide one third of the required monies under existing funding formulas, something that seems rather out of reach considering the recent concerns over the Alaska Ferry Dock and many other local roads, sewers and such that need immediate attention.

In order to keep the long cherished dream of countless political types alive, Mussallem has recruited NDP MP for Skeena-Bulkley Valley, Nathan Cullen in the bid to put some pavement down towards the Tsimshian peninsula. Mr. Cullen recently conducted a tour of the Northwest with a stop in Prince Rupert where Mayor Mussallem offered up some suggestions on how he could be of assistance to the project.

Every political season needs something to shoot for. For Prince Rupert, the city of rainbows as we're occasionally known as, it seems that the much discussed bridge will remain the pot of gold at the end of that political rainbow.

A selection of a few of the past Podunkian items on the access project:

They say the road to an election is paved with…. Good intentions and maybe a bit more pavement

By pass or bridge, where will the support go?

Mussallem said the key to getting the project going was a change in the way grants funding opportunities are made and the criteria to fulfill them.

"The difficulty for the City of Prince Rupert to realize many of its civic projects is to find its own portion of matched funding required by various federal infrastructure grant programs, which in many ways can be an upwards of one-third allotment," wrote Mussallem.
.
The major benefits from implementation of the TAP includes connecting the communities of Port Simpson and Metlakatla to Prince Rupert and to the provincial highway system and greater access to Digby Island for the Prince Rupert airport.

The TAP has been talked about by local leaders for the better part of a decade but has not been anywhere close to becoming a reality.
.
While the provincial government has indicated to local politicians that it would be supportive and interested in funding their portion of the project, the federal government has not been nearly as warm to the idea.

Under current rules, if the city wants TAP to go ahead it will need to come up with one-third of the price tag, which the city does not have.

"For financially strapped communities, this is a significant problem and one that causes poorer communities to be left behind with increasingly poorer and decaying infrastructure," Mussallem continued in his letter.

Infrastructure was one of the main focuses of Cullen's Riding Tour on the Economy (see main story above) and in that focus group, Mussallem could be found explaining his points and advising Cullen on what he can do to help out the community.
Posted by . at 9:28 pm