Winning their share of the vote one stomach at a time 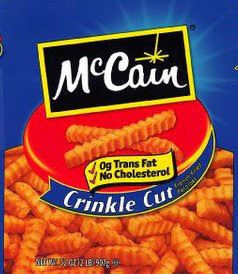 Credit the New Brunswick based McCain Foods with a creative attempt to build market share, based on the shared name with a more famous brand below the border.
Ready to launch the largest marketing campaign in three years for the world renowned French fry maker, McCain Foods USA is about to embark on their own version of a Presidential tour, with the goal of making sure that McCain's french fries are a crowd favourite from the White House to the average American's house.
While many corporations tend to avoid politics at the best of times, McCain's is hoping that American's will get the joke and take the campaign in a purely nonpartisan way, voting with their stomachs for the Blue bags of fries available in frozen food counters almost everywhere.
The Globe and Mail examined the marketing strategy in their Report on Business section posted on line on Wednesday.
Posted by . at 12:09 am