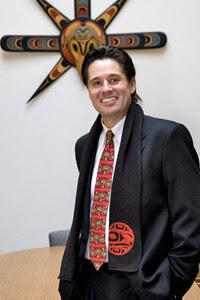 The Mayor has been providing a little inside information on Alaskan politics to the Vancouver Sun, which publishes an article in Saturdays paper that includes a thumbnail sketch of Pond's impressions of the now nominee for Vice President of the Republican Party Governor Sarah Palin.
Mayor Pond examines her plan for oil drilling in the Arctic slopes and offers up his own impressions of the oil industry possibilities, with his belief that drilling for oil can be done without environmental damage, given appropriate safeguards and technologies.
.
In the course of the article he appears to offer up his own his support for oil and gas drilling on the coast of BC, a position that ties in nicely with the ambitions of the Provincial Liberal party.
It's a position that very well may help to speed up the ever popular rumour in town that he has higher ambitions than just being the Mayor of Prince Rupert in his future.
.
And considering the now fairytale like rise of the Governor of Alaska from her local PTA and small town Mayor, to Governor and now VP candidate, who knows where the Mayors own ambitions may reach.
In the course of the Sun article, the Mayor recounts the occasions where he crossed paths with the Governor, from her inaugural ball in 2007 and later that year at the Pacific NorthWest Economic Region meetings.
Palin at odds with Canada on Arctic refuge drilling
Larry Pynn
Vancouver Sun
Saturday, August 30, 2008
Canadians who oppose oil drilling in the Arctic National Wildlife Refuge because of its potential impact on shared caribou herds will be "horrified" at the choice of Alaska Gov. Sarah Palin as John McCain's Republican vice-presidential running mate in the U.S. election.
That's the opinion of Prince Rupert Mayor Herb Pond, a politician from northwest B.C. near the southeast Alaskan border, who admits to having invited himself to Palin's inaugural ball shortly after she was elected the state's first female governor in 2006.
"If your primary concern is protecting the wildlife refuge and making sure no activity ever happens out there, you'd be horrified," he said in a phone interview Friday.
But Pond says he is not one of those people, and personally believes that drilling for oil can be done without environmental damage, given appropriate safeguards and technologies.
"I think it's possible," said Pond, who also supports an equally contentious proposal for oil-and-gas drilling off the B.C. coast.
"The real challenge is the regulatory regime. How high are you going to set the bar, and how do you ensure the benefits are well distributed to the people who actually live there, who are impacted by it?"
Palin supports drilling in the 7.7-million-hectare refuge, calving grounds of the porcupine caribou herd on Alaska's north coast, bordering Yukon. Canada is opposed to such drilling.
Pond said he attended Palin's inaugural ball in January 2007 in Juneau following her first-time win as Alaska governor.
He met her again in 2007 at a meeting of the Pacific NorthWest Economic Region, a partnership of Alaska, Idaho, Montana, Oregon, Washington, B.C., Alberta and Yukon aimed at promoting greater regional cooperation to enhance global competitiveness.
He describes Palin as a pro-development conservative who isn't afraid of the tough issues.
"She is very dynamic. She's sharp. She listens well. There's a lot of good reasons why they picked her."
But he added: "I don't want to pretend she would know me. I'm not best buddies with the first Republican female nominee."
Pond said Palin's selection as McCain's running mate will help to shed light on a northern region often overlooked by urban politicians to the south. "It can't hurt to have someone who understands this part of the world on the international stage," he said.
Pond added that Palin supports Trans-Canada Corp.'s pipeline bid to deliver natural gas through Alaska and Yukon and end near the B.C.-Alberta border. From there, the gas would enter TransCanada's Alberta system, which feeds U.S. markets.
"If it goes ahead it will be one of the largest construction projects on the planet," he said.
lpynn@vancouversun.com
Posted by . at 1:58 am