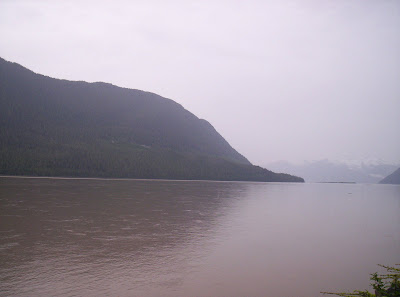 With the sockeye run return not as dire as previously feared, DFO increased the daily limit for folks dropping their lines in the Skeena River. The Daily News featured the reversal in numbers as their front page story in the August 5th paper.

Sockeye numbers in the Skeena River have been better than was feared earlier this summer, as the daily limit for sockeye salmon among North Coast anglers has increased.
Effective as of 12:01 a.m. on Friday, Aug. 1, the daily limit for sockeye increased to four fish per day in the mainstream waters of the Skeena River from the mouth upstream to the confluence with the Kispiox River.
The daily limit for sockeye among the sport fishing sector had previously been at two fish per day, but until 11:59 p.m. on Mon., Sept. 15, the sockeye daily limit is set to remain at four.
DFO reminded anglers on the Skeena River of the sockeye non-retention area from the boundary sign approximately 100 metres upstream of the confluence with the Kitwanga River downstream to Mill Creek.
Anglers are also now able to catch up to four sockeye per day in the waters of Babine Lake and Nilkitkwa Lake, excluding those waters within a 400-metre radius of the following tributary streams to Babine Lake. Among those tributary streams excluded are Morrison Creek, Pierre Creek, Hazelwood Creek, Four Mile Creek, Six Mile Creek, Pendleton Creek, Twain Creek, Sockeye Creek, Tachek Creek, Five Mile Creek, Tsezakwa Creek, and Big Loon Creek.
From now until Aug. 15, DFO has also increased the daily sockeye limit to four fish in the waters of Pinkut Creek downstream of boundary signs located approximately 25 metres below the fish counting fence, and the waters of the Fulton River.
DFO also reminds all anglers that only single barbless hooks can be used in all streams of Region 6 and that there is a total daily limit of four salmon per day in the aggregate, and that the daily limit for sockeye will remain at two salmon per day in the waters of the Babine River.
Fisheries and Oceans Canada also recently announced that coho salmon angling will open in several waters until Sept. 30.
Four coho, of which two may be over 50 centimetres, can now be caught in several bodies of water.
The areas include the Babine River upstream of the logging bridge located near Sam Green Creek, in the Bulkley River downstream of the Morrice River confluence, in the Kispiox River including tributaries, the Morice River downstream of Lamprey Creek, the Skeena Mainstream upstream of the CNR Bridge at Terrace, and the Telkwa River downstream of Howson Creek.
Coho angling on the Skeena River downstream of the Terrace CNR Bridge is also now open until Aug. 31, with daily limits of four coho salmon, of which two may be over 50 centimetres.
DFO is also urging sport fishermen to participate in the voluntary Salmon Sport Head Recovery program by labelling and submitting heads from adipose fin-clipped salmon. Recovery of coded-wire adipose and fin-clipped salmon provides critical information for coast-wide stock assessment.
Posted by . at 5:59 pm