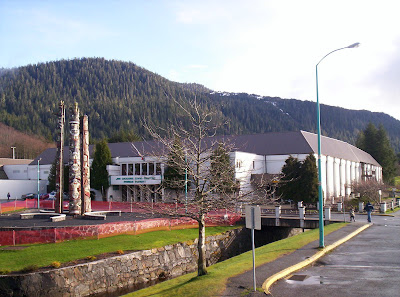 With the City of Prince Rupert and the organizing committee of the All Native Basketball Tournament launching a program to fund renovations to the basketball seating at the Civic Centre, more than a few season ticket holders were beginning to wonder if they still had a place to sit this February.

The questions were becoming so frequent that ANBT President Clarence Martin and Vice President Paul Haugan felt that there was a need to clarify the situation and reassure those long time supporters that all was well for this years Tournament.

They outlined the program’s finer points in an article in the August 22 edition of the Daily News. The article also provided an update on the success so far of the fund raising project and what may be the first mention of a potential loan that the city may take out to finance the project, should their fundraising at least make it to the 50% mark by their September 12 deadline.

Basketball fans around the North Coast community worried about the status of their seasons tickets for the All Native Basketball Tournament – especially considering the 2009 tournament is the 50th annual – need not be concerned.

All-Native Tournament Board President Clarence Martin and vice president Paul Haugan reassured tournament season ticket holders that their seats were indeed safe. They wanted to clarify that the seats in the soon-to-be-newly renovated Jim Ciccone Civic Centre would not be sold off to sponsors for the Russell Gamble Gymnasium new system seating upgrade.

“The message we want to get out to the people that they will not lose their seat,” said Martin.

The City of Prince Rupert had advertised seeking sponsors with its slogan: “Buy the SEAT of our ANTs.”

The slogan has caused some confusion amongst fans, many who make the trip to Prince Rupert from great distances to see the tournament.

The City needs $380,000 of funding for the seat upgrade by September 12, according to Michael Curnes, Director of recreation and community services. He said the city is one third of the way there and would consider taking out a loan if they could at least hit the halfway mark by the cutoff date.

Curnes was also sorry that the information might have mis-construed fans of the tournament but said that has made sure that people know the facts when they call him.

Martin said that he was not upset in any way with the city but he was concerned that the wrong information was circulating around about who is actually going to get in those seats come next year.

Fans have already purchased all the available season tickets to the games with a $25 deposit and this has caused some fear that they may not get the seat they’ve paid for.

“All of us (in the ANBT) are getting calls asking us why we are losing our seats,” he said.

“And they are not. It’s just a bad word that they used. Using the work ‘buy’… they should have used ‘sponsorship.’

The ANBT board would like to see the word changed to end the confusion.

“We don’t want to cause any consternation between Michael Curnes and the board,” said Martin.
“The sponsorship of the chair is one thing,” added Haugan. “You don’t own a chair you are just sponsoring a chair. There might be some reassignments because of the configuration of the new seating is a little different from what we originally planned but there isn’t going to be a bad seat in the house.”

The new renovations will also enable the ANBT to increase attendance at every game during the tournament. Plus, the change in seating could provide help for North Coast media, such as the radio broadcasts on CFNR

After all, during the final quarter of the Senior Men’s Final between Bella Bella and Hydaburg, Alaska, the noise in the Civic Centre was so loud, it made CFNR’s broadcast of the final few minutes of that contest rather difficult. The upcoming renovations could ameliorate this situation, suggested Haugan.

But with that in mind, the city is seeking sponsors to help pay for the Civic Centre’s new seating, which is to be installed by January.

Haugan said the All-Native group is 100 per cent behind the City’s project.

“The Civic Centre has needed new seating for a long time,” said Haugan. “Because it’s our 50th anniversary, it’s coming at a perfect time and we just want the people to know that they can get involved by sponsoring chairs.”

Haugan suggested that prospective sponsors would be able to mount a plaque with a memorial or a family name on each seat sponsored, which would sit on the chairs for the life of the chair.