Plans aplenty to serve the world of container shipping to America 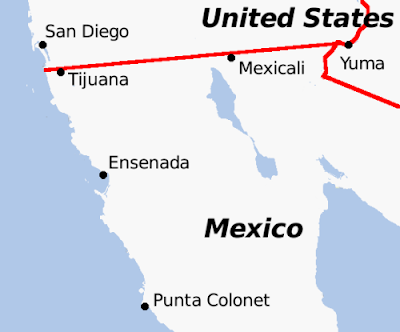 Port expansion continues to be a popular topic these days, with the details just released on a five billion dollar investment, which result in the creation of some 80,000 jobs and a dedicated rail link to the USA, all set to be in place by 2012.

No it’s not Phase Two of the Fairview Port, but Mexico’s entry into the world of logistics and world trade Punta Colonet.

The Mexican government announced details of the much anticipated project today, outlining how they hoped the ever growing demand for port facilities will make Mexico one of the continents leading destinations for shipments from Asia.

By 2020, it’s expected that Punta Colonet would be handling up to 6 million TEUs, twenty-foot equivalent units annually, providing Mexico with more than double the nation's current freight capacity.

The plan is one which will no doubt be watched with great interest by those at the Port of Prince Rupert, who have their own ambitious expansion plans on the board as well.

The developments in Mexico will also of course be of great interest to investors and shipping lines, who always are on the lookout for cost savings and new options for the wide range of vessels that head for North America with their Asian goods.

The details on the Mexican plans were picked up by the San Francisco Chronicle and posted to their website today. Their evaluation followed a number of other reports on the latest entry to the shipping links between North America and Asia.
San Diege Untion-Tribune-- New port on horizon
Los Angeles Times-- Punta Colonet, Baja California
Baja Insider-- Chinese and Korean interests want a port facility in Baja California
Fairplay Shipping News-- Punta Colonet bids starting

Mexico to build port in Baja to serve U.S.
Dan Keane, Associated Press
Thursday, August 28, 2008
(08-28) 04:00 PDT Ensenada, Mexico -- President Felipe Calderon opened bidding Thursday for construction of a huge new seaport that could eventually compete with Los Angeles-Long Beach, the largest port complex in the United States.
Mexico's $5 billion Punta Colonet project would transform a wind-swept bay 150 miles south of the U.S. border into a booming port city, creating an estimated 80,000 jobs, drawing freighters from Asia and funneling manufactured goods north.
"We're looking to be sure we don't fall behind in making Mexico a strategic logistics platform for trade and global investment," Calderon said while touring the foggy beach where the port will stand.
A planned railroad would link Punta Colonet to the United States, allowing freight to skip Southern California traffic and head directly to points across the Midwestern United States, including Chicago. Planners have yet to determine where the tracks would cross the border - although El Paso, Texas, and Yuma and Nogales, Ariz., have been mentioned.
The port would be the largest infrastructure project of Calderon's administration, which has pledged hundreds of millions of government dollars for highways, railroads and airports in the last year in an effort to create jobs and pump cash into Mexico, even as the world economy slows.
At Punta Colonet, however, Calderon is seeking private bidders to build the port and accompanying railroad before running it on a 45-year lease.
The bidding should conclude late next year, and the port should start operating in 2012, said Jose Rubio, project director for Mexico's Baja California state, which is working with the federal government to develop the port.
By 2020, the port should be able to annually handle 6 million TEUs, or twenty-foot equivalent units, a measurement used to estimate container traffic - more than double the nation's current freight capacity, Transportation Secretary Luis Tellez said.
Los Angeles and Long Beach processed a combined 15 million TEUs in 2007 - 40 percent of all freight entering the United States, including 80 percent of imports from Asia.
Punta Colonet is one of several competitors to Los Angeles and Long Beach. A massive expansion at Canada's northern Prince Rupert Port will also use rail to move goods to U.S. markets. and a $5 billion expansion of the Panama Canal will make it easier for Asian freight to reach Miami, Atlanta and other southeastern U.S. cities.
Posted by . at 11:06 pm