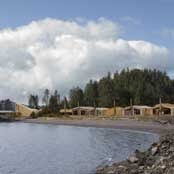 Last weeks grand opening of the Haida Heritage Centre in Skidegate provided an opportunity for local clans to celebrate their involvement in the weekend festivities.
.
The CBC website has a number of pictures taken by former North coast broadcaster Russel Bowers posted to their site, from last years public opening, which provide an interesting window into the various aspects of the Centre.

The Daily News outlined the Grand Opening celebration’s high points, with a front page story in the August 26 edition.

In true Northwest fashion, even more people than expected braved the wet weather on Saturday for the grand opening of the Haida Heritage Centre in Skidegate.

An estimated 1,200 special guests and members of the public were in attendance for the historic day on Haida Gwaii that began with the Haida Clan Parade, where people of all ages donned their regalia and drums and followed their chiefs for a half kilometer march to the Centre from Jag’s Beanstalk.

Jason Alsop, operations manager for the Haida Heritage Centre, said the turnout and enthusiasm was astounding, from that first event right through to the last performance of a Haida language play in the evening.

“Each clan came really proud to show off who they are, singing proudly and showing off their banners and crests,” said Alsop.

“Some of them had even made things to tow their kids in, like one wagon that was turned into a canoe. So people really took ownership of that event and were happy to take part.”

Skidegate Chief Councillor Willard Wilson said he received a call on his cell phone in the morning from Premier Gordon Campbell with the news that he and the other government officials were stuck at the airport due to fog, and wouldn’t be making it to Skidegate as expected.

However, that didn’t stop the celebration from proceeding as planned, with the arrival of three newly carved Haida canoes shortly after the parade wrapped up.

“I’ve always been partial to the canoes, and I was so proud to see the three new ones as they came onto the beach,” said Wilson.

“I see Haida art in so many places, it just amazes me what our ancestors did and what our carvers do to this very day.

“I’ve been to the museums in Victoria and Vancouver, and I didn’t even get to see all the Haida art that was there because there’s so much. They left us with a rich legacy and now it’s up to this generation to do the same.”

With 850 place-settings prepared for the seafood barbeque, everyone was pleasantly surprised when there more mouths than utensils.

Old Massett Chief Councillor Elizabeth Moore was one of many community members from the Massett area who made the trip to be a part of the festivities, and was overwhelmed at the amount of food there was on-hand to enjoy.

“I kept kind of low key in the background with the regional manager from Indian and Northern Affairs Canada, and visiting Chief Ray Jones from Gitsegukla who was really enjoying his crab and sockeye salmon,” said Moore.

“I noticed the speeches were open for everyone, including the Queen Charlotte City Mayor and her council, which was really good for building partnerships on the island.

“And my two youngest children just love that museum.

“So I know the Centre is going to be very inspirational for our young Haida people to learn more about their culture and further their education.”
Posted by . at 1:09 am