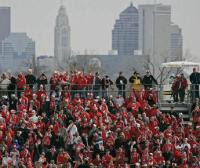 "They're pissing all over the damn place, and as you can see, they've littered it up considerably," ---Columbus police lieutenant Kevin Conley recounting his Saturday experiences with Toronto FC fans.
Travelling Toronto soccer fans, have now joined the legions of Italy, Germany and England, as far as soccer and poor public image are concerned.
The followers of Toronto FC, let loose in the streets of Columbus, Ohio over the course of Saturday morning, showed that Toronto is ready to join the ranks of the lager louts of European football fame. Taking to the highways in the thousands, a bus and car caravan rolled into Columbus on Saturday (others with better planning skills arrived on Friday night), early enough for kick off, but unfortunately for the Columbus citizenry and its police too early for their own good.
Fueled by alcohol along the way, the troublesome FC supporters were described as rather obnoxious at times, urinating in proximity to a Columbus church, surrounding police cars and taunting Columbus residents with profanity and gestures. Inside the stadium, flares were repeatedly thrown onto the field giving it the surreal feel of an Italian soccer match, just before the riot batons are set to swing.
While most of the fans were reported to be well behaved and enjoyed the hospitality of the home side hosts, the group that caused the most distress for Columbus have done their share in building up (or is that down?) the reputation of the travelling bunch for the rest of the season. Columbus police called in a few extra hands for the end of the game, to make sure that their unfriendly and most likely now unwanted guests found their way to the buses and onto the interstate.
To be fair, the reports out of Columbus about the game don't paint quite the vision of any roiling insurrection, in fact the 2300 FC fans seemed to provide a bit of a spark for the local fans, who it seems are prone to sit on their hands at FC games.
But for some of the shocked citizens on the outside and the police, the image of the Toronto FC fans is a little bit different than a bunch of folks out for a little fun. For them it's a case of "you can dress the soccer fans of Toronto up, but you may not want to take them anywhere."
If things continue along this vein, they may have to hand back this award, if they win it!
.
Toronto Star--FC fans paint Columbus red
Toronto Sun--Toronto pride hits the road
Globe and Mail--TFC disappoints in opener
National Post--Rowdy Toronto FC fans confront Columbus police
Columbus Post Dispatch--Even their team's loss barely dulled Canadians' verve
.
Photo from Columbus Post Dispatch website
Posted by . at 9:56 am